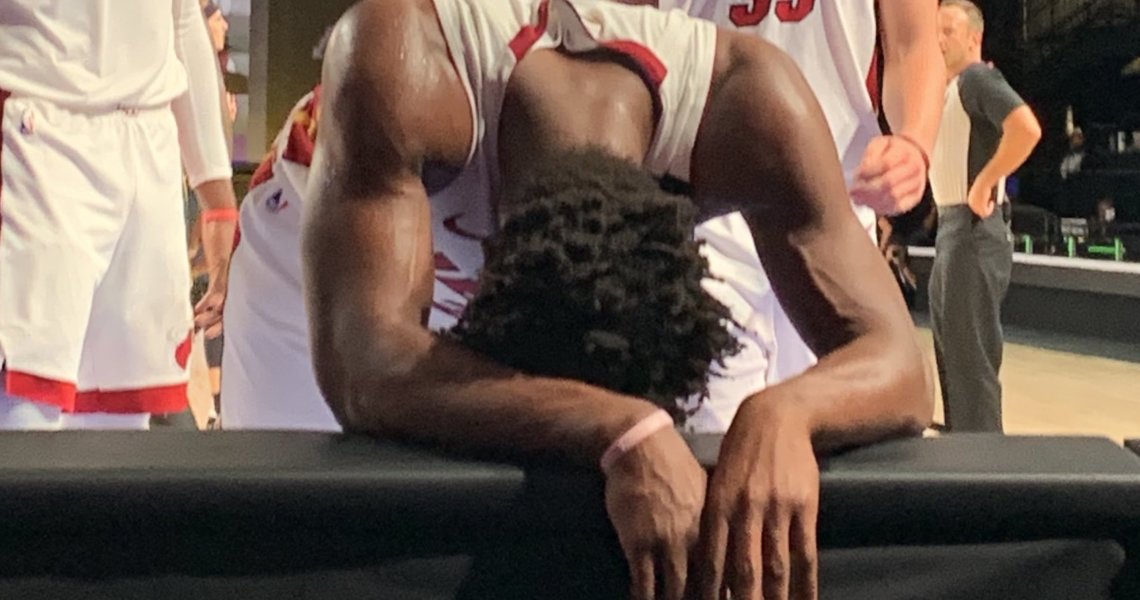 Welcome to Nightly Pro Notables: a collection of the hottest sneakers and biggest moments of the night on October 9, 2020.

In the most competitive NBA Finals game yet, the Miami Heat came out on top in a barnburner of a 4th quarter. Jimmy Butler and LeBron James went back and forth, throwing haymaker shots at the rim.

Many had counted out Butler’s squad after falling 3-1, and many were prepping for a trophy ceremony tonight. Anthony Davis even wore gold sneakers for the assumed win.

But Mr. Buckets toughed it out, making sure to celebrate the game 5 win with flair:

Continue reading below for all the highlights and sneakers on yet another night in the Orlando Disney World bubble.

All Heart for Jimmy Buckets

Butler was in his bag with all the dribble moves on one play, leading to his patented midrange jumper:

Most of Jimmy’s buckets were earned through all the contact. Even after getting elbowed by Dwight Howard earlier, Butler still attacked the rim like on this layup:

He further put the team on his back with constant tie scores in the last two minutes:

Butler played 47 minutes and 11 seconds of this game and one foul in the last minute revealed his exhaustion:

Butler made all his free throws going 12-12 from the charity stripe. The final statline: 35 points, 11 rebounds, 11 assists, and 5 steals. Another huge triple double as Jimmy eyes game 6.

Jimmy balled out in the Jordan Jumpman Diamond Low, which can be found at StockX.

Jimmy still needed help in the scoring department though and Duncan Robinson fit those shoes perfectly. Duncan hit his quick fire shot from all spots, even with defenders running into him:

The three-point shooting breakout star also did other things, including this highly unexpected putback:

Like Butler, Robinson put his body on the line taking a direct charge from a steamrolling LeBron James:

The game was only close due to the contributions of one LeBron James. The King put up a game-high 40-point, yet still played facilitator out there. He missed a Kuzma assist here then made sure to get it on the follow-up attempt:

The 7 assists and 13 boards were cool and all but James’ scoring was key. The Lakers were in the game with crazy efficient shooting from LeBron, with the legend shooting 6 of 9 from three including this confident logo shot:

Ultimately, the storybook game 5 ended on a Danny Green clanked shot, although LeBron certainly gave him the best look after drawing a triple team. Will game 6 see chip 4 for the King?

James first warmed up in the purple

This purple and gold colorway in this highlight is currently unavailable, but ycan find other colors of the Nike LeBron 7 at StockX, Flight Club, andStadium Goods.

James’ gameplay occurred in the “Lakers” Nike LeBron 18, which hasn’t released yet. You can stay tuned to sites like StockX for availability.

A familiar site, but one you don’t mind rewatching. Yet another LeBron James lob to Anthony Davis happened this game. The right handed spike dunk was cool and all, but it was his gold custom Kobe 5s that lit up the Internet.

This colorway isn’t currently available, but you can find other options at StockX, GOAT, and Flight Club.

To mix it up a little, we saw some new kicks that are perfect for the start of Boktober. Quinn Cook may not get much run in the games, but his footwear stayed fresh on the bench with the OG Reebok Kamikaze 2.

This Sonics colorway of Shawn Kemp’s signature shoes can be found at StockX and GOAT.