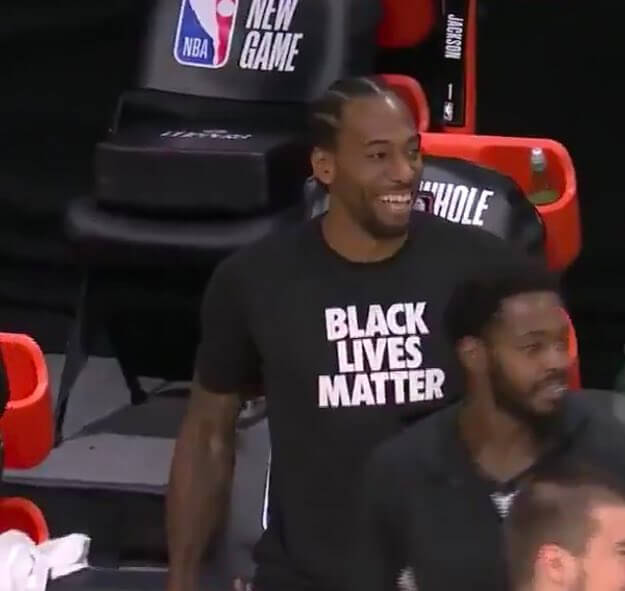 Welcome to Nightly Pro Notables: a collection of the hottest sneakers and biggest moments of the night on August 14, 2020.

This was the calm before the storm as the seeding games in the bubble conclude. Many teams rested their starters, which allowed the young’uns to show out. Players were also more laid back, as even Kawhi Leonard smiled (the shocking content can be seen below.)

Hamidou Diallo has largely been quiet with the Oklahoma City Thunder, outside of winning the 2019 Slam Dunk Contest. With many players resting, Diallo got the chance to play and took advantage with career highs in minutes (40), rebounds (11) and points (27) against the Los Angeles Clippers.

Diallo rocked the 2018 Nike Kobe A.D. in the DeMar DeRozan blue PE colorway in this game, which can be found at StockX.

On the opposite side of Diallo was Guard Terance Mann, who also put up career highs in just about every category. Mann was close to a triple double and missed out by just one assist, as Kawhi Leonard reminded him.

Mann wore the Concepts x Nike Kyrie 5 “Ikhet” sneakers this game, which can be found at StockX.

That OKC vs. LA matchup didn’t have many stakes with both teams locked into playoff spots. Somehow the game still went into overtime, with nervous laughter and smiles at the tired Clippers bench.

In a rare sight that needs a National Geographic narrator, Kawhi Leonard was one of the players grinning and smiling. Now if only Kawhi was mic’ed up so we can hear his laugh once more.

Leonard showed his chompers while wearing the the New Balance The Kawhi 1, which is currently unavailable.

As Doris Burke noted in the broadcast, Harden was singled-out by pundit Bill Simmons as having “cheap assists.” We can safely say that this dime pass between his legs was rather boujee, with the fancy assist leading to two-points from Jeff Green.

Despite not playing, Chris Paul warmed up in his latest signature sneaker, the Jordan CP3.XIII. Paul’s 13th sneaker featured a leopard print surrounded by bright green accents. The gum sole adds a classy touch to the new shoes.

The Jordan CP3.XIII is currently unavailable.

Shai Continues to Show Out in Converse

Shai Gilgeous-Alexander stays rocking Converse, busting out a red, white and yellow colorway of the All Star Pro BB Low.

This colorway is currently unavailable, but you can check for other colors at StockX.S