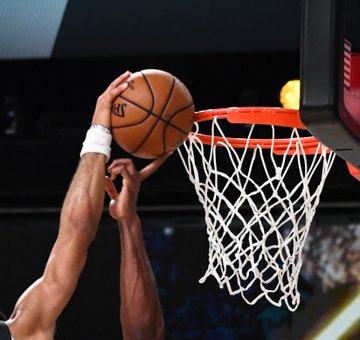 Welcome to Nightly Pro Notables: a collection of the hottest sneakers and biggest moments of the night on September 7, 2020.

Amongst the two playoff games in the Orlando bubble we saw a single-finger block, a karate kick to the face, and multiple poster dunks. 2020 in a nutshell? Check below for these highlights as well as a return of classic Derrick Rose kicks.

Kawhi Leonard’s strength has been the stuff of legends, with his force on full display tonight against the Denver Nuggets. Jamal Murray went for a poster slam on the Klaw but got absolutely denied. Jamal actually had the upper hand in the air, but Leonard asserted his power by finishing the block with just his middle finger. Lord knows how he didn’t sprain anything from the force.

Leonard wore the New Balance The KAWHI sneaker in white and gold, which isn’t currently available.

There’s been a few learning moments for Michael Porter Jr. in the bubble. The highs have been a lot more frequent though, including this poster slam over Montrezl Harrell. The Nuggets made a few skip passes that led to MPJ driving to the rim. Trezz tried to take the charge, but didn’t get the whistle. MPJ simply flew through Harrell for the right-handed slam. The cameraman immediately went to a shot of Michael’s dad, who turned his head subtly as if to say “you see that?”

The Puma RS Dreamer “Concrete Jungle” that Porter Jr. slipped on this game can be found at StockX

Despite taking the L, Nikola Jokic got over on Kawhi Leonard and the Clippers on this play. The Joker directed the offense the entire play, at his own slow pace of course. The Serbian big man looked off his man with his gaze directed in the corner. This fooled Kawhi who ran in that direction, with Reggie Jackson leaving his man to contest Jokic. This left Monte Morris wide open under the rim for the Joker to drop the no-look dime assist.

The Toronto Raptors got blown out in game 5, but you can’t say Pascal Siakam didn’t put up a fight. Things got inadvertently violent when Brad Wanamaker drove to the rim from the corner. The Boston guard drew in Siakam before passing to Daniel Theis under the rim. Brad’s force pushed the airborne Spicy P, pushing his leg into super-kicking Theis. Let the Jim Ross voiceovers commence. Pascal may have a post-basketball career in the WWE waiting for him.

The “Hype” Nike KD 13 involved in this kick features butterflies and chains on the upper can be found at StockX and GOAT.

Playoff P for the W

The high-point man on the night was Paul George, who put in a much needed 32-point performance that the Clippers 100% needed. Kawhi had an uncharacteristically bad 3-point shooting night, so PG needed to work all night on threes.

The points leader in the Celtics win was Jaylen Brown, who put up 27-points in the Boston victory. Jaylen even got a massive poster slam over on OG Anunoby:

Brown wore the “Signal Green” adidas Dame 6 in this game, which can be found at StockX.

The man known in college as the “Blue Arrow” rocked black and red kicks tonight. Jamal Murray brought back the “Bred” adidas D Rose 1 that first released in 2008, retroing in 2020. You can find this colorway at StockX.