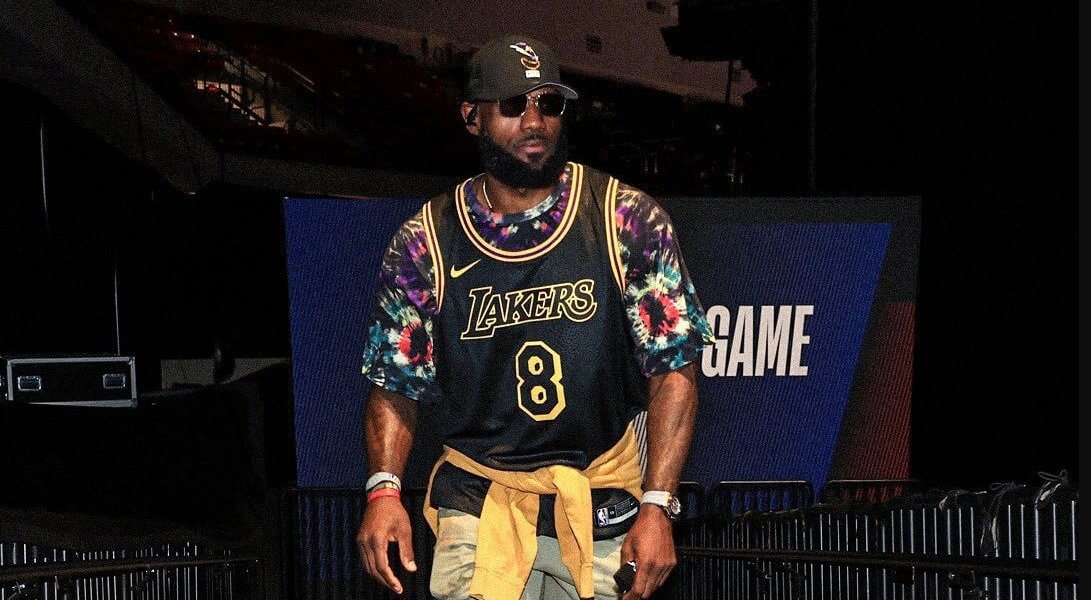 Welcome to Nightly Pro Notables: a collection of the hottest sneakers and biggest moments of the night on August 24, 2020.

On this Kobe Bryant Day, the Los Angeles Lakers showed out with a blowout win, led by a LeBron James double-double. Additionally, various players across brands wore kicks in tribute to the Black Mamba.

Without further ado, check below for the best footwear and moments in the 2020 NBA Playoffs.

LeBron Does It For Kobe

The Los Angeles Lakers first game after Kobe’s passing was against the Blazers, a loss that saw emotions get the best of LeBron. This would not be the case when King James faced the Blazers again on Kobe Bryant Day. Before the game, James pulled up to the bubble game in the black mamba jersey with 8 on the front and 24 on the back:

James started the game off hot, knocking down threes and dropping dimes left and right. By dumb luck or a sign from above, the Lakers started the game 24-8 on Portland. L.A. never looked back, routing the Blazers on Kobe Day.

The sneakers King James wore this game was the Nike LeBron 7 “Fairfax”, which you can find at StockX and GOAT.

The “hometown advantage” from the Orlando Magic is all but erased the last three games with Giannis Antetokounmpo absolutely balling out.

The Greek Freak has been a freight train since the game 1 loss, rolling through the lane like on this poster slam over Nikola Vucevic.

Antetokounmpo finished the game with 31 points, 15 boards, and 8 assists to go with the W.

Antetokounmpo’s poster dunk came while wearing the “White Cement” Nike Zoom Freak 2, which hasn’t released yet. You can find other colors at StockX and Dick’s Sporting Goods.

J.R. Smith only had 3 points tonight, but it was rather eventful for Kobe Day. The three-pointer Smith made put him in a tie with Kobe Bryant in all-time 3-pointers made with 292.

In terms of footwear, J.R. wore the Nike Kobe 5 Protro and wrote the phrases “WWKD (what would Kobe do)” and “shoot the ball” on the midsoles.

You can find the Nike Kobe 5 Protro at StockX, GOAT, and Flight Club.

No rebounds are safe with the high-flying Derrick Jones Jr. on the court. The 2020 Dunk champ rose above the Pacers Myles Turner on a poster tip dunk.

The Puma Clyde Hardwood that DJJ wore can be found at Dick’s Sporting Goods.

Carmelo Anthony from midrange has been money his whole career and the degree of difficulty on this turnaround makes it even more pleasing to the eyes.

Kobe Day saw even adidas athletes rocking tribute shoes to the Black Mamba. James Harden did that with a player exclusive adidas Harden Vol. 4, featuring yellow and purple throughout. Scales are featured on the lace eyelets, while Kobe’s birth and passing date are on the toe.

This colorway isn’t expected to release but you can find other colors of the adidas Harden Vol. 4 at StockX, GOAT, Adidas.com, and DicksSportingGoods.com.

P.J. Tucker had a variety of PEs to choose from for Kobe Day, and decided to choose a rarely-before-seen black version. This has Kobe’s accomplishments written in gold cursive on the medial side, surrounding a purple swoosh.

This colorway never released, but you can find other Nike Kobe 1s at StockX, GOAT, Stadium Goods, and Flight Club.

Finally, we have Damian Lillard wearing the black and gold colorway he’s been creating highlights with. Today, his pair featured the numbers 8 and 24. Lillard’s career has been tied to #24, with his first game ever against Kobe Bryant and the Lakers.

You can find the adidas Dame 6 at StockX and Dicks Sporting Goods.