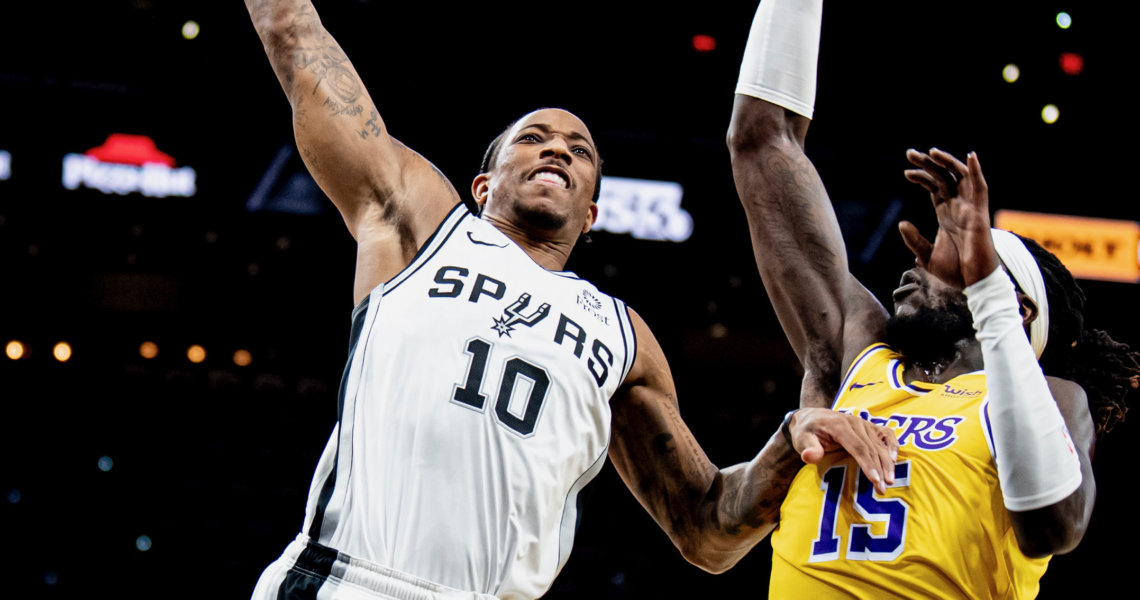 Welcome to Nightly Pro Notables: a collection of the hottest sneakers and the biggest moments of the night on December 30, 2020.

With the year almost over, LeBron James decided to celebrate with a birthday bash for the history books. Kawhi Leonard continues to be accidentally funny with his first masked game. We also have DeMar DeRozan getting in his yearly poster dunk, which you don’t want to miss.

Continue on for these performances and highlights, as well as some heat on feet on another night of NBA basketball.

In year 18 in the league, LeBron has spent half of his life hooping professionally. December 30 marked his 36th birthday and he had his typical great game.

The King’s GOAT resume got a new entry though via insane consistency. No other player has scored in double digits for 1000 consecutive games, so LeBron is in a league of his own. Considering James’ career is 1270 games long to this point, this feat is rather impressive.

Mr. James rocked a pink PE of his JamesGang LeBron 18. While this currently is unavailable, you can find the multicolor version at StockX and GOAT.

What Can Brown Do For You?

Hard to believe with Jaylen Brown’s consistent career that he just now has reached 42 points in a game. Here it is though, Brown’s new career-high, and man, Jaylen could not miss against the Grizzlies.

The Boston Celtics star rocked an all-white adidas T-MAC Millennium in this game, which isn’t available right now. You can find other colors at StockX and GOAT.

Speaking of career-highs, LeMelo Ball finally got his shot going for a 22 point game outing. More importantly, Ball hit 4 of 5 threes showcasing his potential in his young, 5 game career.

Melo wore a white and multicolor Puma Clyde All-Pro for this moment, which you can find at Dick’s Sporting Goods.

Masked Kawhi; Just as Good as the Regular Version

After being elbowed by teammate Serge Ibaka and missing the game the Clippers lost by 50, a masked Kawhi Leonard returned against the Trail Blazers. The mask notably isn’t as cool as Kyrie or LeBron’s blackout mask, or as nostalgic as Rip Hamilton’s. This one is comically cored out in the middle with double straps and a mouth slit.

Jokes aside, the Klaw still put up numbers in a blowout against Portland, dropping 28 points.

Leonard rocked a multicolor version of the New Balance KAWHI signature, which isn’t available at the moment. You can find other colors at StockX and GOAT.

Even in year 12, DeMar DeRozan still has the bunnies needed to posterize defenders. After last year’s massive slam over Chris Boucher, DeRozan’s next victim was Montrezl Harrell. The new Laker just had the worst night as this highlight started with him getting blocked.

Trezz then tried to redeem himself on the play on the other end of the court but witnessed his own poster. DeMar roared on his vicious dunk with Harrell missing completely on his block attempt.

DeRozan wore the Nike Kobe 7 “BHM” in this game, which you can find at StockX and GOAT.

Poster Number 2 on the Night

Not to be outdone, Miami Point Guard Kendrick Nunn got his own poster in tonight. Nunn’s moment came on a fast break as well, as he raced to the rim with Bobby Portis chasing. Unlike the Trezz posterization though, Portis got too far under the rim allowing Nunn to slam on his head unimpeded.

Kendrick wore the Dreamville x Puma Clyde Hardwood in this poster highlight, which you can find at GOAT.

After Andre Iguodala debuted the Yeezy adidas basketball sneakers officially a few days before, the Celtics Carson Edwards laced up his own pair.

This appears to be the adidas Yeezy Quantum, as the Yeezy BSKTBL version was banned for having too much reflective material. You the Yeezy QNTM “Barium” colorway at StockX and GOAT.

Blue Snakes are Back

Trey Lyles has always rocked Kobe sneakers despite being a big man. It looks like he got a new pair of the “Blue Camo” Kobe 6, meaning there’s a chance this classic colorway may drop in Protro form.

You can find the 2011 version at StockX and GOAT. Stay tuned to the site for an Protro release news.