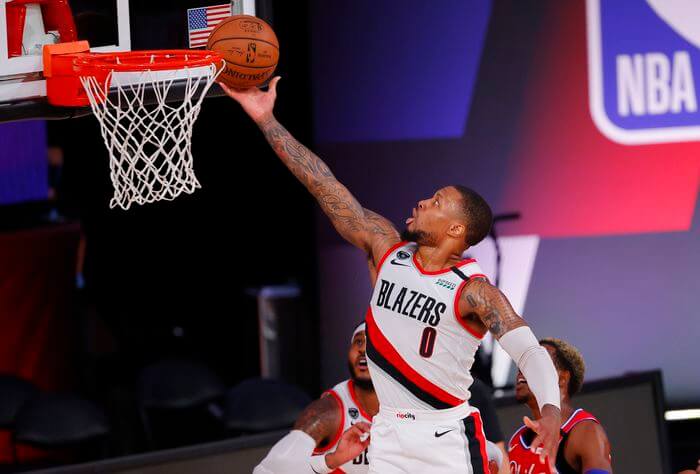 Welcome to Nightly Pro Notables: a collection of the hottest sneakers and biggest moments of the night on August 9, 2020.

Dame with the 51 Piece

The game and day after missing two free throws in the clutch vs. the Clippers, Damian Lillard started (and finished) hot. Dame carved up the Sixers on multiple drives and three-pointers. The craziest bucket came early in the first though, when you figured he couldn’t miss.

If this was H.O.R.S.E., you’re totally getting a letter.

His grey sneakers in this game aren’t currently available, but you can find the adidas Dame 6 at StockX and DicksSportingGoods.com.

A Career Game for Austin Rivers

Austin Rivers was playing the Kings tonight but he stole the crown with a career game. The Rockets guard sliced his way to 41-points on the night, freezing Sacramento with his crossovers all night.

The Pharrell x adidas Crazy BYW X 2.0 Rivers wore this game can be found at StockX.

JamesHarden plays chess when his defenders are playing checkers on plays like this one. First he freezes Cory Joseph on quick left-to-right crossovers. The Beard then attacked the rim where he faked right on Bogdan Bogdanovic before making the easy layup to his left.

Many see Markelle Fultz’s career as a disappointment, but what’s unquestionable is his crazy athleticism. Like on this play, where he absolutely erases Kemba Walker’s layup while trailing behind.

The custom Nike Kobe 11s Markelle has been wearing in the bubble aren’t on sale, but you can find other colorways at StockX, GOAT, Stadium Goods, and Flight Club.

The Memphis Grizzlies may’ve lost tonight to the Toronto Raptors but Ja Morant had a big double in the shoe game. Ja made like a meteorologist in the classic Nike KD 4 “Weatherman” sneaker that originally released in 2011.

You can find the Nike KD 4 “Weatherman” at StockX and Flight Club.

What Other Players See When Trying to Rebound Near Melo

Carmelo Anthony rocked one of the dopest Air Jordan 34 PEs today, wearing this do not cross/ caution tape sneakers. FOH, he’s got the rebound.

You can find the Air Jordan XXXIV shoes at StockX and DicksSportingGoods.com.

DeMar DeRozan not only got another key win for the Spurs but also got the W with his footwear. His shoes match the San Antonio jerseys perfectly with grey and black throughout in tiger print and checkerboard patterns.

This Nike Kobe 5 Protro isn’t likely to release, but you can find other colorways at StockX, GOAT, and Flight Club.