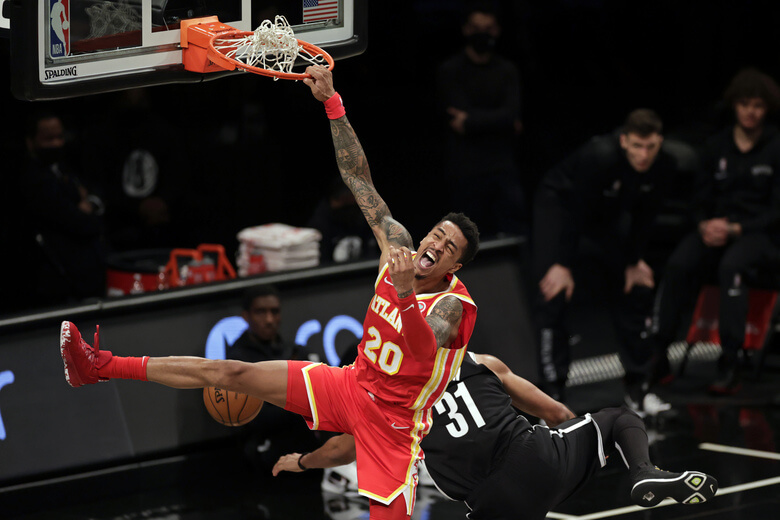 Welcome to Nightly Pro Notables: a collection of the hottest sneakers and the biggest moments of the night on January 1, 2021.

On this New Year’s Day, we saw some notable moves up history books for LeBron James and Carmelo Anthony. We also saw two poster slams that you have to see to believe from Jerami Grant and John Collins. We also have some post-Christmas kicks – all of which you can see below.

LeBron James rang in the new year with yet another triple-double in the Lakers win over the San Antonio Spurs.

In only his third season with the Lake Show, this happened to be James’ 22nd triple-double, placing him third all-time after passing Kobe Bryant.

James rocked a white and black Nike LeBron Ambassador 13 in this game, which isn’t available in the U.S. You can find other colors at GOAT.

Speaking of walking triple-doubles, Luka Doncic didn’t quite get there tonight against the Miami Heat, but did put up wild numbers. His 27 point 15 rebound game was the 6th time he tallied a 25-15 game. The Mavericks are 6-0 in such games.

Impressive stuff, as is Doncic’s crazy fakes that led to this easy layup:

Luka wore a white and gold Jordan React Elevation in this game, which isn’t available. You can find other colors at StockX.

Chris Paul’s addition to the Phoenix Suns has been an overwhelming success this season. CP3 made a direct impact on this play, as his tough pull-up jumper over Nikola Jokic served as the dagger to the Nuggets’ hopes of a win.

The shoe on-feet on this play was the white and black Jordan CP3.XII in this game, which is not available. You can find other colors at GOAT.

In the first of two massive poster dunks on the night, Jeremi Grant introduced himself to the Pistons faithful with a right-handed slam over Daniel Theis. The cherry on top was Theis ducking in mid-air and Grant stomping his way back on defense.

Grant rocked the “Denim Fire Red” Jordan 3 in this game, which you can find at StockX and Flight Club.

For poster dunk number 2, John Collins absolutely eviscerated Jarrett Allen with a “man’s jam.” Collins cocked back, almost floating with the helpless Allen before throwing down the ball on Jarrett’s afro. The momentum forced Allen out of bounds while Collins roared under the hoop.

John wore a red adidas Dame 7 called the “I Am My Own Fan” colorway in this game. You can buy this pair at StockX.

Carmelo Anthony continues to move up the all-time scoring list, passing Tim Duncan for 14th with the three-pointer seen above. Melo is now 170 points away from 13th on the list, Dominique Wilkins.

Anthony laced up a red maroon velvet colorway of the Jordan 35 (known as the Carmerlot) for this game, with no release info at this time. You can find other colors at StockX and GOAT.

Christmas isn’t over for James Johnson, as he rocked the white and red Jordan 14 tonight, also known as the “Candy Cane” colorway.

You can find this colorway at StockX, GOAT, and Flight Club.