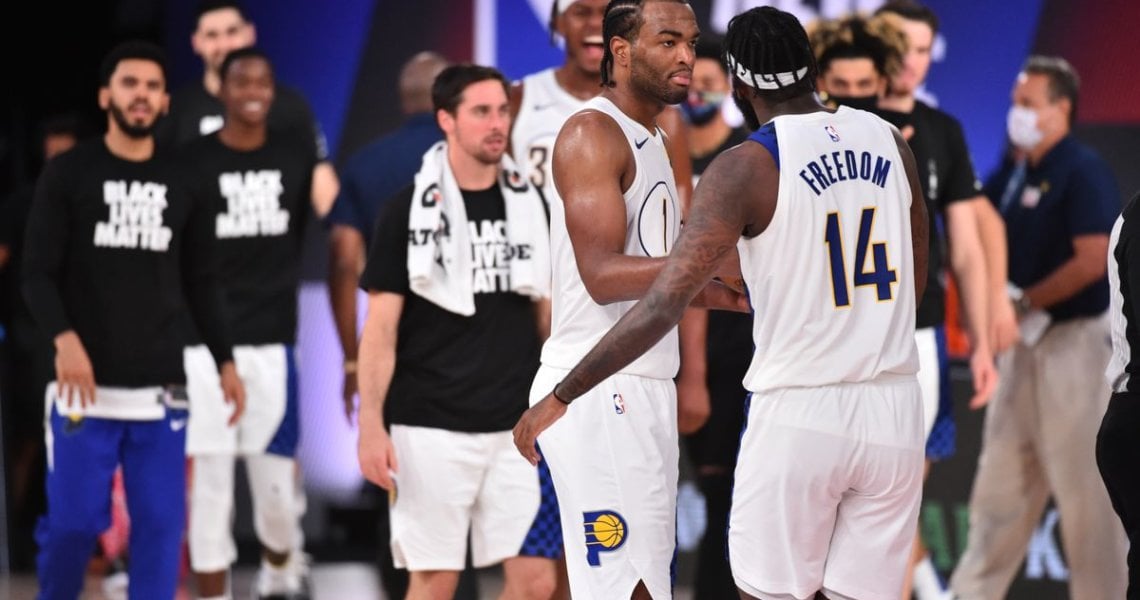 Welcome to Nightly Pro Notables: a collection of the hottest sneakers and biggest moments of the night on August 1, 2020.

Role players showed out on this Saturday, with an offensive explosion from the Pacers TJ Warren. For highlights, we have basketball Twitter favorite, Bol Bol showing out in his first official pro game. The footwear was quiet, although more adidas athletes are rocking social justice messaging on their sneakers. Check below for the best performances, highlights, and kicks on day 3 of bubble basketball.

Casual NBA fans may be thinking, who? TJ Warren has actually been a low-key scorer for most of his career, averaging at least 18 points a game the last 3 seasons. The Indiana Pacers forward saw his 19.2 ppg average jump after an insane 53 point perfromance against the Philadelphia 76ers. This includes 19 in the first quarter and 29 at the half.

More importantly, Warren’s Pacers got the W as well.

In a losing effort against the Pacers, Joel Embiid put up big numbers. “The Process” bodied opposing bigs with 41 points and 21 rebounds.

You can find the 2020 Under Armour Anatomix Spawn 2 that JoJo rocked at DicksSportingGoods.com.

The Miami Heat pulled away from the Denver Nuggets for the win on the back of a hot 4th period from Kelly Olynyk. Yeah, you read that right. Olynyk basically become the Heat logo, scoring all 20 of his points in the 4th quarter.

The Miami big man was in select company from this scoring outburst:

You can find Kelly Olynyk’s sneakers this game, the Nike KD 12, at DicksSportingGoods.com

Bol Bol was one of the most talked about players going into the Orlando bubble, with his lanky build and skill on display in the scrimmage games. His first official game was tonight against the Miami Heat after rehab and D-League stings prior to the restart. The 7’2″ center used all of his 7’8″ wingspan for these offensive boards and second chance points.

The Nike Kobe 5 Protro “EYBL” Bol Bol rocked can be found at StockX.

The New Orleans Pelicans JJ Redick was the latest to rock adidas’ custom sneakers made for social change. Like Harden’s sneakers last night, this adidas Dame 6 boasts gold and black accents, with “Ready For Change” plastered on the lateral side. The heel also says “say their names”, referencing the names of black deaths in recent years at the hands of police like Breonna Taylor.

This custom isn’t available, but you can find the adidas Dame 6 at StockX and DicksSportingGoods.com.

The King laced up a fresh pair of his signature line as always. This time around, he rocked a red and gold rendition of the Nike LeBron 17 Low. Like in past models, this is a special collab with Filipino retailer Titan. The tongue features LeBron’s crown logo along with the words “Para Sa Kadakilaan,” which translate to “Strive For Greatness.”

You can find this Titan “Agimat” colorway of the Nike LeBron 17 Low at StockX.