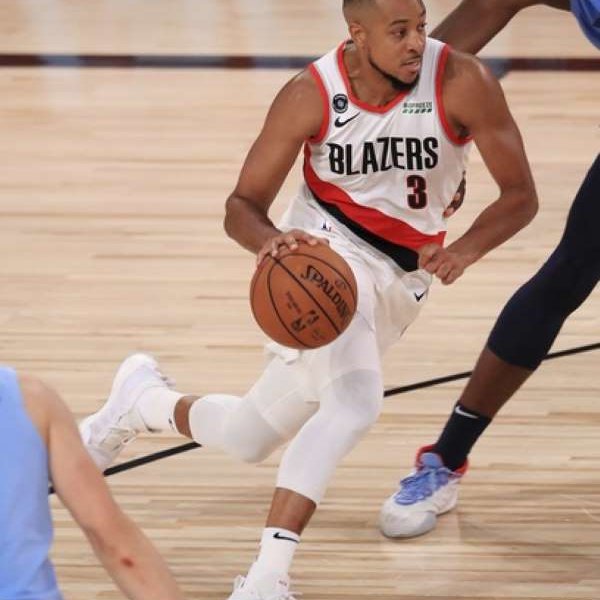 Welcome to pro notables: a collection of the hottest sneakers and biggest moments of the night on July 31, 2020.

This was the second night of the seeding games in the Orlando/Disney World bubble. The larger slate of 6 games featured tense games with playoff implications, particularly the nail-biting overtime game between the Portland Trail Blazers and Memphis Grizzlies.

With their playoff hopes all but on the line, CJ McCollum was the jolt the Portland Trail Blazers needed early with 19 first-first half points. McCollum would go on to swish a key 3 early in the overtime as well, helping power the Blazers to within 2.5 games of the 8th place Grizzlies.

The Li-Ning YuShuai 13 Low that CJ rocked is currently unavailable.

You can find the Nike LeBron Witness 4 shoes that Nurkic wore at Dick’s Sporting Goods.

Despite taking the L, a short-haired De’Aaron Fox absolutely sliced up the San Antonio Spurs defense to the tune of a career-high 39 points.

You can find the Nike Kobe 9 that Fox rocked at StockX, GOAT, Stadium Goods, and Flight Club.

With the Blazers only up 3 in overtime, this Lillard layup sealed the deal on the win against Memphis. Damian somehow double-clutches his way past Ja Morant and Jaren Jackson Jr. in mid-air, avoiding contact with the smooth finish.

Of course, PJ Tucker would bust out the best pair of sneakers early in the bubble games. The Light Bone and Bright Crimson Nike Air Fear of God 1 he rocked against the Dallas Mavericks apparently is 1 of 3 pairs made. Tucker owns 2 of the 3 pairs in his size 14, with FoG founder Jerry Lorenzo having the third. Tucker got the hookup from being friends with Lorenzo and has dubbed the limited sneakers the “Air Tucks.”

James Harden played his first Orlando bubble game in a custom colorway of his 4th signature shoe with adidas. This (along with other adidas sneakers in Orlando) was specifically requested from top three stripe athletes to have their voices heard. The adidas brand did a great job with these black and gold customs.

Oh and the Beard dropped a bubble day two high 49 points in the sneakers. Light work.

You can find the adidas Harden Vol. 4 at StockX, GOAT, Adidas.com, and DicksSportingGoods.com.

Jayson Tatum rocked a wild rendition of the Jordan 34 for his first bubble game, which happened to release on SNKRS the same day, selling out on the app.

The wild patterns ties into Tatum’s frequent trips to the zoo with his son Deuce. This features faux fur from leopard, zebra, giraffe and tiger print utilized on the upper. Personal details include his JT logo on the right tongue, as well as Deuce’s name on the inner tongue.

You can find this Jordan XXXIV “Zoo” PE for Jayson Tatum at StockX.

As the face of the Nike Adapt BB line, it was only fitting that Ja Morant debuted the new tie-dye colorway on court. Earlier in the day, Ja even tweeted a special image that unlocked the purchase of the colorway on the SNKRS App.

The Adapt BB 2.0 is the sequel to the first self-lacing basketball sneaker ever, using bungee cables and a motor to lockdown your feet into the shoes.