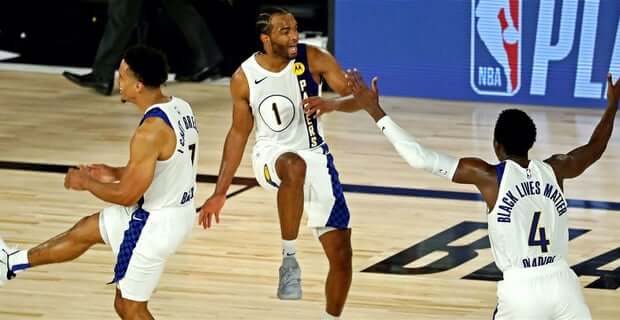 Welcome to Nightly Pro Notables: a collection of the hottest sneakers and biggest moments of the night on August 8, 2020.

We saw big games from TJ Warren (what’s new) as well as fat stats from Luka Doncic (what’s new). Additionally we saw some powerful messaging on some of the more popular Nike basketball shoes, via WNBA stars Sue Bird and Diana Taurasi.

The legend of bubble TJ Warren continues with his dominant performance against the Los Angele Lakers. 18 of his 39 total points came in the first quarter to pace his Indiana Pacers to another win.

Luka Doncic notched another triple-double, which shouldn’t be surprising for the 21-year old. The real Luka Magic came in the amount of dimes the Mavericks star produced, notching a career-high 19 assists. His 19th assist in overtime against the Bucks was his most spectacular:

Luka also managed 39 points and 14 rebounds to post one of the craziest stat-lines of the season.

You can find the Jordan Jumpman Diamond style Luka wore this game at StockX.

The 5-0 Suns kept their bubble dominance alive on the back of 35 points and 6 dimes from Devin Booker, with another W against the Miami Heat.

The blue and orange Nike Kobe 5 Protro isn’t currently available, but you can find that style at StockX, GOAT, and Flight Club.

Trey Burke played pick-and-roll with Kristaps Porzingis to perfection here, throwing a money alley-oop as well. The Unicorn caught the ball with one-hand and slammed it over the late Brook Lopez for this Mavericks highlight.

The adidas N3XT L3V3L that Kristaps wore here can be found at StockX and GOAT.

Move Through the Lane with the Gyro-Step

Giannis Antetokounmpo is one of the best straight-line attackers in the league. This ability to draw fouls keeps defenses honest for the eventual “gyro-step” from the Greek Freak like this one against Dallas.

The Nike Zoom Freak 2 can be found at StockX and GOAT.

Just miles away from the NBA bubble is the WNBA bubble, where some of the poignant racial justice messages are occurring. Both Sue Bird and Diana Taurasi decided to feature the names of black people in recent years who have been murdered by police and people with racist ideology.

Jamal Murray made his first appearance for the Denver Nuggets in the bubble, returning to the starting lineup. Another return was his footwear, the classic adidas adiZero D Rose 1 that originally released in 2010. This colorway returned for nostalgic three-stripe hoopers in 2020, hence Murray’s new pair.

You can find this adidas adiZero D Rose 1 “Simeon” yellow colorway at StockX.