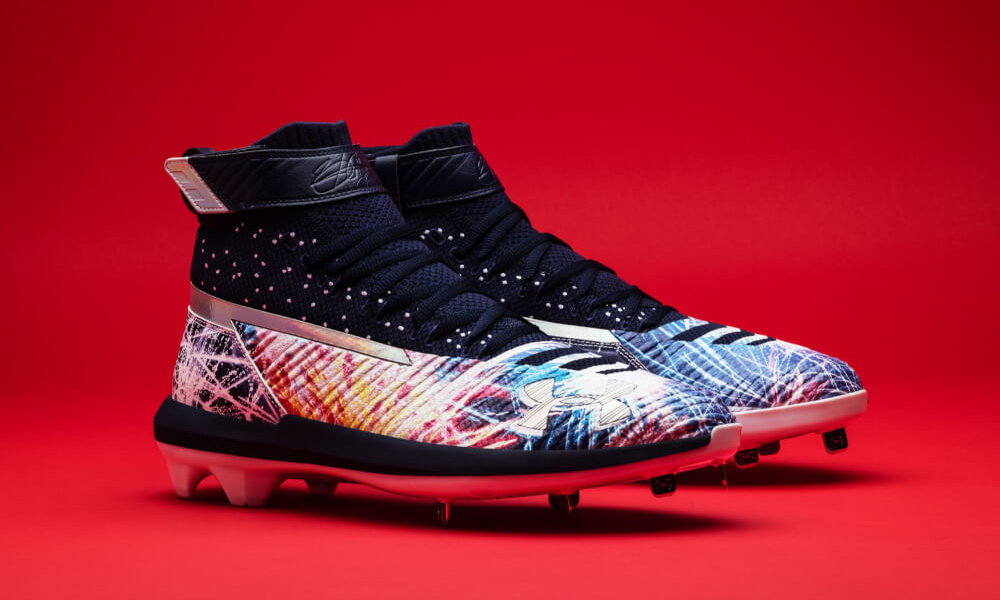 Baseball swag hits its peak every year in July.  Independence Day and the MLB All-Star Game are the driving forces of the surge in swag, with new products and colorful creativity in every park across the country.  Here’s what we saw: Bryce Harper’s Under Armour Harper 3 is a highlight for us, with a grand finale of fireworks under a starry night theme that any blue-blooded American can appreciate.  The Harper 3s are set to release in the fall.  The 4th of July versions are player exclusives just for Bryce. Francisco Lindor continues to be one of the best-dressed Big Leaguers ever.  These New Balance COMPv1s are absurdly sexy.  Like the Harper 3s, they incorporate fireworks on the toes, and then the American flag upper takes care of the rest.  Flames.

“We the People” over the Jumpman logo is pretty epic.  This cleat is Derek Jeter’s last signature cleat, the Jordan Jeter Lux, re-released and available here, and KD Custom Kicks crushed these for Yankee minor league pitcher Nick Nelson. Carlos Asuaje of the Padres gets it.  Here he showed off the full gamut of swag supplied by Nike Baseball for the 4th, as well as a very patriotic LizardSkin grip that you can buy here.  The cleats are too clean.

Adidas Baseball’s rendition of the 4th was sparkler inspired and featured the new Icon 4 Bounce cleats (similar custom option here).  The Icon 4 Bounce is a less expensive cleat than the Boost Icon 4, offered as a miadidas custom for just $100 compared to a stock Icon 4 at $120-$130 with no personalization.  According to adidas, however, the Icon 4 Bounce is “by no means a take-down of the Boost cleat.” According to adidas, Aaron Judge and Marcus Stroman actually wear an Icon 4 Bounce “Hybrid,” which borrows the mesh upper from the Icon 4 Boost and the tooling (midsole and plate) from the inline Icon Bounce.  To our surprise, adidas will actually offer Judge’s and Stroman’s hybrid style via DicksSportingGoods.com for $80-$90. The $80 TPU version features an all-new StealTrax TPU cleat configuration that is designed to perform like metal cleats and has significantly greater traction than previous TPU plates, according to adidas.  Judge wears the TPU cleats in batting practice sometimes.  No word yet on the release date.

Chris Sale is fired up about 4th of July. ? @redsox #ChrisSale #RedSox

The 4th of July hats were absolute fire. Chris Sale’s sunnies really tied it all together. Get ’em while they’re hot.

These July 4th jerseys are ??

Cardinals rookie Tyler O’Neill just got recalled and had this pair of Huarache batting gloves waiting for him upon arrival in Arizona. The USA versions are exclusive to the pros, but you can shop other Huarache Elite colors here.

J.T. Realmuto of the Marlins getting in the spirit of the 4th with his @nikebaseball catching gear. ? @marlins #JTRealmuto #MiamiMarlins

The Nike catchers gear had some surprise competition this year from Marucci Sports and a backstop named Buster:

The artwork done by WPW’s favorite custom artist, @mache275, is painted on Marucci’s new Buster Posey catcher’s gear, which will make its first retail appearance in 2019. I’d follow Buster Posey into the gates of hell if he was wearing this gear. The Alpha Huarache Mids for @jhey22love had just the right amount of everything.

Which of these items is your absolute favorite of the 4th?

@ us if we missed something.

Hands on with the Marucci C-MOD
Load more