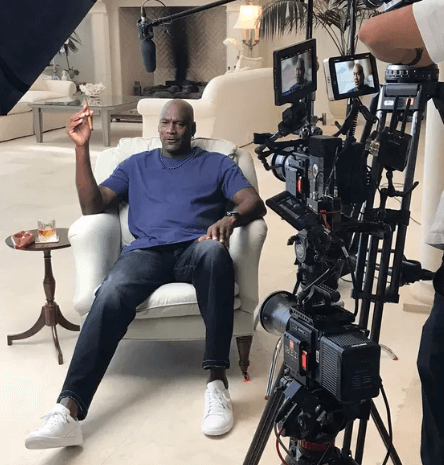 Every Sneaker Worn in The Last Dance: Episodes 3 & 4

The Last Dance takes a never-before-seen look at the last season of the Chicago Bulls dynasty. The second batch of two episodes released on April 26, and looked at Michael Jordan’s relationship with Dennis Rodman, Phil Jackson and Scottie Pippen leading up to the 1997-98 NBA season. Excluding Phil, all three Bulls were Nike athletes and of course, that means prominent features of their sneakers. In the case of Rodman, he wore many other brands as you will find out below.

Take a look below at the footwear during key moments in episodes 3 and 4 of the Last Dance ESPN documentary.

Once again, the shoes featured prominently in the 1997-98 season was the Air Jordan 13. The white and red “Chicago” colorway is seen plenty in game footage, as is the “Bred” version.

Michael is also seen in the training room having taken off his “He Got Game” 13s amongst the “sniff brothers” who served as MJ’s bodyguards.

After Scottie Pippen declared he wouldn’t be playing for the Chicago Bulls in 1997, Mike called upon Rodman to step his game up. Queue montage of Dennis jumping all over the court in the Converse All-Star Rodman.

Dennis would later be seen giving his game-worn All-Star Rodmans to a young British fan later in episode 3.

The Converse All-Star Rodman could use a retro, as the sneaker isn’t currently available.

Another Dennis Rodman sneaker that made brief cameos in montages was the Converse D-Rod High.

Fun fact: Dennis would rock this sneaker after his run with the Bulls in stints with the Lakers and Mavericks.

An Easter egg on the sideline in the 1997 timeline is the Air Jordan Jumpman Team 1 sneaker worn by Ron Harper, Toni Kukoc, and other Bulls.

You can find the Jordan Jumpman Team 1 at GOAT.

Once Scottie Pippen ended his hold-out from the Bulls team, he returned rocking the Nike Air Hype Uptempo sneaker.

This shoe is unfortunately not available and could use a retro.

Karl Malone was featured at the end of episode 4, as pressure of Mike’s future clouded the Bulls team. Malone led a comeback over Chicago on the February 4, 1998 game in Utah, sweeping the Bulls in the regular season.

The APEX Mailman is not currently available.

Early in episode 3, Doug Collins is introduced as Mike’s new coach in 1986, replacing Kevin Loughery. Collins was seen sweating buckets in his first game against the Knicks. Mike basically told him to chill and put up 50 points in the Air Jordan 2 that game.

You can find this Air Jordan 2 at StockX.

The “White Cement” Air Jordan 3 is prominently spotlighted in episode 3, first in shots of practice.

The AJ3 was then shown in a montage of Mike’s dominance in the league, winning MVP and Defensive Player of the Year in 1988. This alongside Michael’s NBA Slam Dunk contest win the same year, as seen above.

The “Black Cement” colorway also is in the montage as Mike’s first All-Star MVP sneaker.

You can find either Air Jordan 3 colorway at StockX and GOAT.

“The Shot” was heavily highlighted in episode 3 of The Last Dance. You can read more on this moment HERE. The “Bred” AJ 4 is so heavily tied to this game-winner that some alternatively call it the “Shot” Jordan 4s.

Mike also wears this colorway against the 1989 Eastern Conference Finals against the Detroit Pistons.

You can find the Air Jordan 4 “Bred” at StockX and GOAT.

The Air Jordan 5 “Black Metallic” appears in the photo montage of Michael’s 1989 Eastern Conference Finals loss to the Pistons in the explanation of the “Jordan Rules.”

This seems to be a continuity error as MJ was wearing the aforementioned “Bred” 4 this series. Mike did wear the AJ 5 in the 1990 series loss to the same Detroit squad.

You can find the Air Jordan 5 “Metallic” at StockX and GOAT.

The first Eastern Conference Finals matchup between the Detroit Pistons and Chicago Bulls featured Dennis Rodman in Nikes. The Air Revolution was worn by the Worm in the Bulls 1989 defeat against the Pistons.

You can find the Nike Air Revolution at GOAT.

While Rodman was known to wear Reeboks in this Pistons period, it would appear that he rocked the New Balance NBX during the 1990 and 1991 Eastern Conference Finals, according to Getty Images.

Yes, Dennis both eliminated the Bulls and got eliminated by Chicago in a New Balance basketball sneaker.

Magic Johnson was the bar for what Mike wanted to be leading up to his first championship. It was poetic that Jordan beat Johnson in 1991, all while the Lakers legend rocked the Converse Magic 1.

This style could use a retro, as the Converse Magic 1 is not available at this time.

After finally vanquishing the Pistons, Scottie was seen in The Last Dance locking down Magic Johnson in the 1991 NBA Finals.

Near the end of episode 4, John Paxson gets a shoutout for playing hero in game 5 of the 1991 NBA Finals.

Paxson and teammate Horace Grant rocked the Reebok Pump Omni Lite in this pivotal game. The black colorway seen above was notably worn by Dee Brown when he pumped his way into the 1991 Slam Dunk Contest win.

You can find the Reebok Pump Omni Lite at StockX and GOAT.

The past timeline in episode 4 culminated in Michael Jordan’s first NBA championship win against the Los Angeles Lakers. Mike notably switched hands on a layup in the 1991 NBA Finals, which you can read more about HERE.

Michael wore the black and Infrared Air Jordan 6 for this big win, as well as his series sweep of the rival Detroit Pistons in the 1991 Eastern Conference Finals.

You can the Air Jordan 6 “Infrared” at StockX, GOAT, Flight Club, and Stadium Goods.

For a final deep dive sneaker, we looked into Phil Jackson’s 1967 rookie year sneaker with the New York Knicks. After some research, it appears many of the Knicks played in the classic Converse Chuck Taylor All-Star high-tops.

You can find the Converse Chuck Taylor All-Star Hi-Top at DicksSportingGoods.com.