Despite it’s plain name, “the shot” will conjure up memories of this Michael Jordan highlight, a moment that made MJ a household name.

The Chicago Bulls had 3 seconds and possession in the winner-take-all game 5 matchup in the 1989 NBA Playoffs. The Cleveland Cavaliers were up 100-99, and tasked Craig Ehlo to defend the obvious choice to take the last shot. As Mike himself said on The Last Dance documentary, it was a mistake to not have Cavs wing Ron Harper on him who he felt defended him best. Bulls 7-footer Brad Sellers had the inbound, with Ehlo and Larry Nance Sr. trying to prevent Michael from getting the ball. Ehlo had made the go-ahead bucket prior to this play and had a team-high 24.

MJ eventually split the two defenders to collect a pass, immediately driving left. Mike took two dribbles before raising up with Ehlo in his grill. Michael seemed to hang in the hair forever, kicking his feet back before releasing the high-arching shot from the free throw line. As the buzzer sounded, the rock swirled around the rim before falling through the net. The Cleveland crowd was dead silent, as Jordan leapt for joy with his now iconic fist pump. Ehlo also famously crumbles behind Mike, as his best defense couldn’t stop the shot from going in. Sellers and the rest of the Bulls swarm Michael, with Coach Doug Collins screaming, raising his arms, and running towards the future GOAT. The damage in this game: 44 points, 6 assist, 9 rebounds, and Craig Ehlo’s entire basketball career.

The “Bred” colorway Mike rocked in this game-winner can be found HERE. 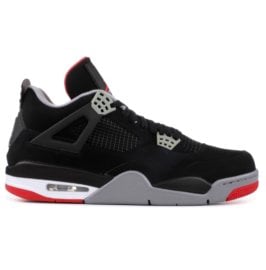