Pro expectations were high for Trae Young after becoming the first player to lead the NCAA in both points and assist in a season. After one year at Oklahoma, Young was drafted 5th overall in the 2018 NBA Draft by the Dallas Mavericks. Soon thereafter, he was traded alongside a draft pick to the Atlanta Hawks for the 3rd pick in Luka Doncic.

Young started his rookie season off with buckets while Luka was also setting the league on fire. While Young was smaller compared to other point guards, his ability to knock down the long three makes Trae a threat on offense. “Ice” Trae used his cold, long-range marksmanship to pile on the points, while still utilizing his vision to find the open man.

While Luka went on to win the 2018-19 Rookie of the Year award, Young finished strong with multiple 30-point games as well as a few game-winners.

Prior to the NBA Draft, Trae Young signed a multiyear deal with adidas to endorse their sneakers. This includes the Harden Vol. 3, as well as the laceless N3XT L3V3L style. You can check his other footwear and signature career moments below. 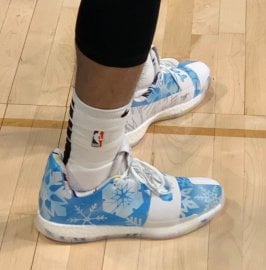 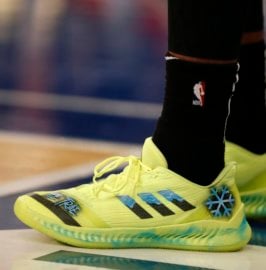 The pull-up range for Trae Young is almost unlimited on the court, as the Charlotte Hornets found out in this game. The Atlanta Hawks found themselves in a shootout with the Hornets, with the game going into double overtime. Early in 2OT with the Hawks down two, Young dribbled the ball deliberately up the court. ... Read more

In just his second-year, Trae Young dropped a 50-piece against the upstart Miami Heat. Ice Trae's first bucket was in his bag: a stepback three that was feet behind the line. Somehow, Young continued to drop bombs farther from the line, sinking his third trifecta from 35-feet. With Migos' Quavo in the crowd, Youn... Read more

Ice Trae sure made a case for a 4-point shot during All-Star Weekend. The setting was the second half of the 2020 All-Star game with the clock whittling down. Trae Young received the pass off a rebound and meticulously dribbled up to half-court, where he launched a bomb. The shot went straight through the net, wi... Read more

Trae Young's prolific sophomore season saw another big statline against the New York Knicks. Per usual, Trae did a lot of his work from the long-ball. This includes a bomb from the mid-court Atlanta Hawks logo in the third quarter. A crossover into a long three had Ice Trae feeling chilly, pretending to shiver at... Read more

Tragedy struck on January 26, with Kobe Bryant passing away after a helicopter crash. With the NBA mourning, Trae Young decided to do something special to honor the black mamba. After having a hug with his mom, Trae took off his warm ups to reveal a number 8 jersey instead of his normal #11. Like every other team... Read more

The Hawks logo was the spot for one of Trae Young's most impressive career assists. The opposing Phoenix Suns were trying to get a turnover down 7 with about a minute left in this game. On this play, Atlanta big DeAndre' Bembry passed to Trae at half-court to waste time. Suns players tried to double team Young at... Read more