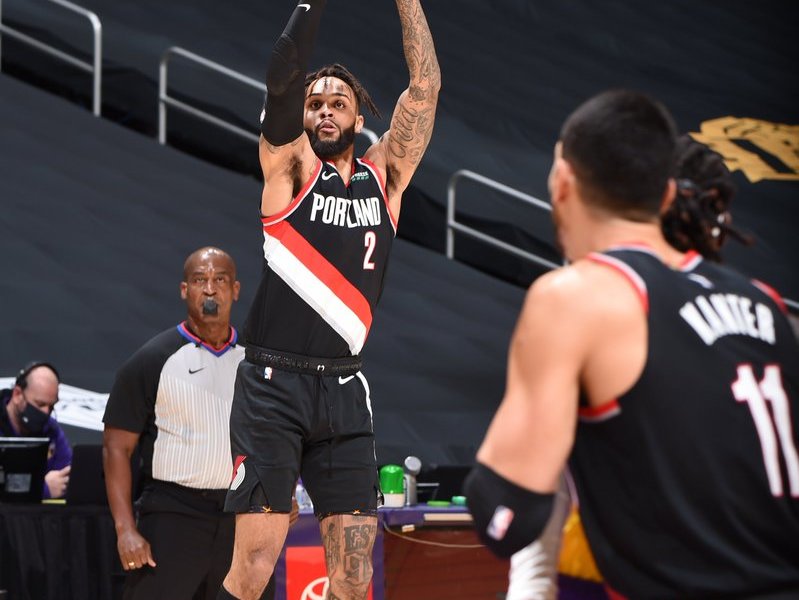 Welcome to Nightly Pro Notables: a collection of the hottest sneakers and the biggest moments of the night on December 28, 2020.

Tonight, we saw some fire by way of Gary Trent Jr’s shooting hand. We also saw some game-winning money from Donovan Mitchell, as well as a lot of assists from the Joker. Continue to read to also find a rare pair of sneaker swaps from LeBron James.

The Los Angeles Lakers seemingly had tonight’s game under control until Gary Trent Jr. caught fire. GTJ had himself a 3rd quarter, finishing 7/11 on 3-point shots on his way to 28 points.

Trent Jr. rocked the blackout adidas Harden Vol. 4, fittingly called the “Lights Out” colorway. You can find these sneakers at GOAT.

Nikola Jokic did Nikola Jokic things tonight, notching yet another triple-double. The Joker was finding cutters from every angle, as well as open corner shooters. Nikola’s vision had him accomplish a wild, feat as his 18 assists were the most for a center since Wilt Chamberlain bagged 19 dimes in 1968.

Jokic wore the Nike Air Zoom BB NXT in a blue and yellow PE colorway in this game. You can find other colors at StockX and GOAT.

For the third straight night, a game-winning shot was nailed within the last 10 seconds of the game. On this play, Mike Conley was forced to pass out on a drive that stalled in the paint. Donovan Mitchell crossed over on OKC Guard Lu Dort to get in the lane. His floater tickled the glass before falling in the rim to give his Jazz a 110-109 lead that Utah would not surrender.

The yellow/gold Crayola x adidas D.O.N. Issue #2 that Spida wore for this game-winner can be found at GOAT.

Rarely do you see the ultra athletic LeBron James get his shot emphatically blocked. Derrick Jones Jr. did just that tonight, as he swatted the King’s layup with force off the backboard.

Despite the Puma contract, Derrick Jones Jr. laced up the Nike KD 4 “BHM” this game. You can find this colorway at StockX and GOAT.

The Coldest Around the World Dribble

“Ice” Trae Young is back with another highlight play. This time around, Young slickly went behind his back on a fast break. This tricked the Detroit Pistons defenders, allowing Trae to float a shot for a flashy 2.

Young wore the 2020 adidas N3XT L3V3L 2 for this moment, which is available at StockX.

LeBron Mixes Up his Footwear

LeBron James hardly ventures away from his signature sneaker line or his team Soldier line, but he did so tonight against the Portland Trail Blazers. James rocked a multicolor Nike Air LeBron Ambassador 13 with black, teal, and orange during pregame. He then swapped those out for a purple and gold Ambassador 13.

The LeBron Ambassador line tends to be on the more budget friendly side, with pairs releasing exclusively in Asia.

The above colorways are not available, but you can find other colors at GOAT.

This custom isn’t available, but you can find other colorways at StockX, GOAT, and Dick’s Sporting Goods.