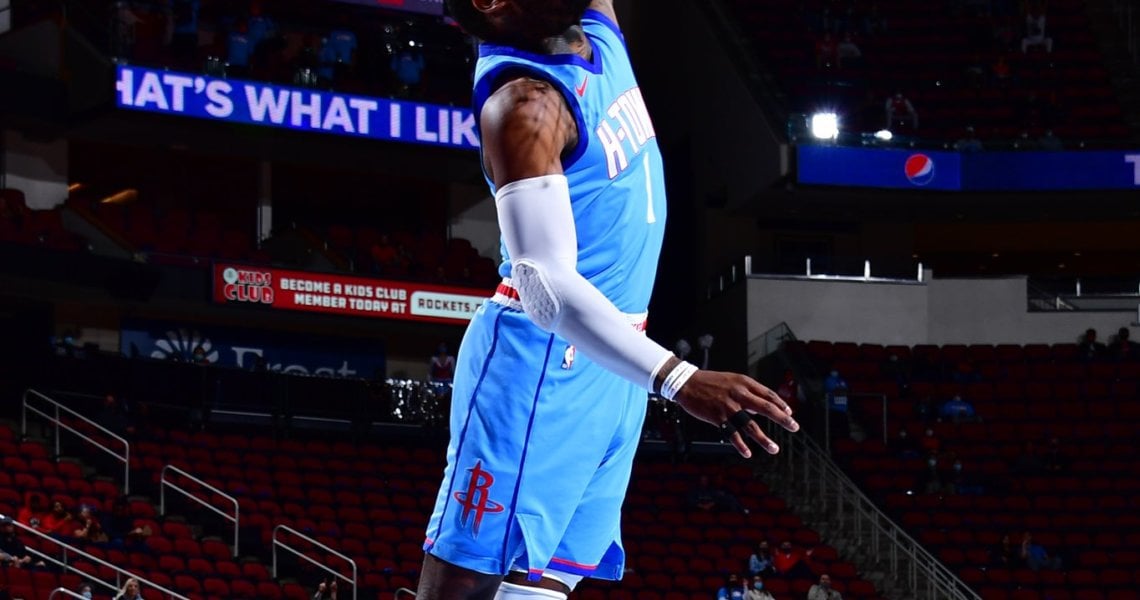 Welcome to Nightly Pro Notables: a collection of the hottest sneakers and the biggest moments of the night on December 31, 2020.

2020 finally has ended but not without a slate of NBA games. After three unexpected restarts to the NBA, here are the highlights and sneakers from New Year’s Eve.

Beard in Blue Gets W

Houston’s first win of the season came with the regular-season debut of John Wall (more on that later) and the debut of the Rockets blue city jerseys. With these additions, James Harden was able to play his signature game with dime passes and stepback 3s aplenty.

The cloud white and multicolor adidas Harden Vol. 5 he wore this game releases on January 4 at adidas.com.

Best Big Man in the League?

Domontas Sabonis’ quiet ascension into an all-star last season was a pleasant surprise. Sabonis is proving this wasn’t a fluke with big numbers again this year, averaging close to a triple-double.

Young Sabonis dropped 25-11-7 in a win against the Cavaliers, all while rocking the all-white Nike Kobe AD from 2017. This colorway isn’t currently available, but you can find other colors at StockX.

John Wall is Back

After more than two years (735 days) on the shelf due to injuries, John Wall has finally returned to regular season action.

In his first official game for the Rockets, Wall dropped 22 points with slashing plays like the one above.

Wall wore two sneakers in this game: the LeBron 3 and Kobe 6 Protro.

You can find the “Oilers” LeBron 3 at StockX and GOAT.

You can find the Nike Kobe 6 “Grinch” at StockX and GOAT also.

An alternative title here could’ve been “Wet Like Book” but alas, this difficult Devin Booker shot deserves all the praise. Booker purposefully drifted out of bounds on this fading jumper that somehow hit nothing but net.

Book rocked a light purple Nike Kobe 4 in this game, which isn’t available. You can find other colors at StockX, GOAT, and Flight Club.

Before the ball could drop at Time Square, Ben Simmons didn’t hesitate on a corner three that led that the ball dropping straight through the net. Ben is now shooting 100% from beyond the arc, as this was his lone three-point attempt of the season.

Simmons’ 3rd career three-pointer made occurred while rocking the Nike Zoom Rize PE with a gold swoosh. That isn’t available, but you can find other colors at StockX and GOAT.

P.J.’s player exclusive flexes continue, this time wearing the Air Jordan 13 “UNC”. The sneaker likely was made only for North Carolina Tar Heel players, but Tucker has his sources it seems.

This colorway isn’t currently available, but you can stay tuned to the GOAT page in case a size does appear.

Where Did You Get Those?

Not many casual basketball fans would know who Denzel Valentine is or even who he play for? Regardless, the Chicago Bulls guard has some lowkey fire sneakers including this white and green Kobe 4 Protro PE.

Like Book’s pair, you can’t get these but can find other colors at StockX, GOAT, and Flight Club.