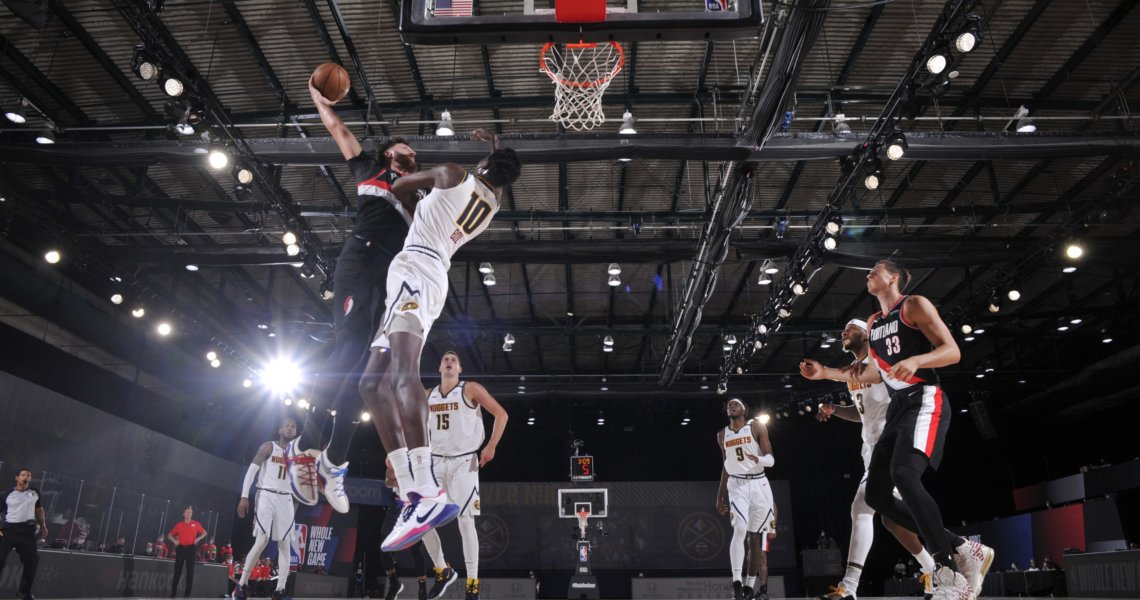 Welcome to Nightly Pro Notables: a collection of the hottest sneakers and biggest moments of the night on August 6, 2020.

In this edition, the Portland Trail Blazers got closer to the 8-9 seed play-in in the West with a huge win over the Denver Nuggets. Lillard, Nurkic and the red hot Gary Trent Jr. make the highlight reel with 4-point plays and poster slams. We also saw the on-court debut of a Jordan Brand classic, debuted by who else but PJ Tucker.

Video game Dame was back in his bag after a slow start in the bubble. Lillard tied his own franchise 3-point record with 11 makes on the night, one coming off a ridiculous 4-point play in transition.

In total, Damian notched 45 points, 12 assists and the W over the Denver Nuggets. His Portland Trail Blazers come within 0.5 game behind the Grizzlies for the 8 seed.

Lillard rocked an all-red adidas Dame 6 that hasn’t released, but you can find other colorways at StockX and DicksSportingGoods.com.

Gary Trent Jr.’s Lights Out in the Bubble

Alongside Lillard in the big win for the Trail Blazers is Gary Trent Jr. GTJ has quickly become the bubble’s top 6th man. Gary’s crazy marksmanship lifting him to be the top 3-point shooter in Orlando with 22 trifectas through 4 games. That’s at a blistering 63% clip from downtown as well.

Gary Trent rocked the Nike Kyrie 1 “Green Glow” this game. You can find all Kyrie 1 colorways at StockX, Stadium Goods, and Flight Club.

Despite fielding a much smaller lineup, the Houston Rockets have notched huge Ws in the bubble. They beat the winningest team in the Bucks earlier and toppled the west’s number 1 seed in the Lakers tonight.

This was fueled by James Harden, who led the way for Houston with 39 points and 12 assists.

The Beard rocked the “Safety Guard” adidas Harden Vol. 4 this game, which can be found at StockX.

Bol Bol has been a revelation for the Denver Nuggets, who have put the rookie out there to rest up their rotation players like Nikola Jokic.

The shine was dimmed a little on this play, with Jusuf Nurkic welcoming Bol to the league. The Blazers star handed to Lillard on a post-up while spinning past Jokic to the rim. Dame hit the Bosnian Beast with the quick pass and met Bol at the rim, hammering home the poster dunk.

The “Space Jam/ Tune Squad” Nike LeBron 17 Low Nurkic wore this game can be found at StockX and GOAT.

How Do You Stop Giannis on the Fast Break?

Seriously, how does anybody stop the freight train that is Giannis Antetokounmpo? The man just rain straight and powered his way to an easy right-handed dunk, unimpeded from any Miami Heat player.

The Nike Zoom Freak 2 can be found at StockX and GOAT.

Just a day after Marco Belinelli debuted the Jordan Air Ship “Banned”, PJ Tucker actually laced the low-key iconic sneaker on court. To be fair, Tuck didn’t wear these in-game, opting to show out in shoot-around. Nonetheless, PJ can say he wore the original banned sneaker on an NBA court like Mike.

You can stay posted to StockX after August 7th release date for availability.

Paul George rocked his latest signature shoe in the PG 4 in the early parts of the Clippers vs. Mavericks matchup. Like the sneaker nickname, PG “flipped the switch” (flip flip) to his first sig in the PG 1 for the second half.

You can find the Nike PG 1 at StockX, GOAT, Stadium Goods, Flight Club, and DicksSportingGoods.com.