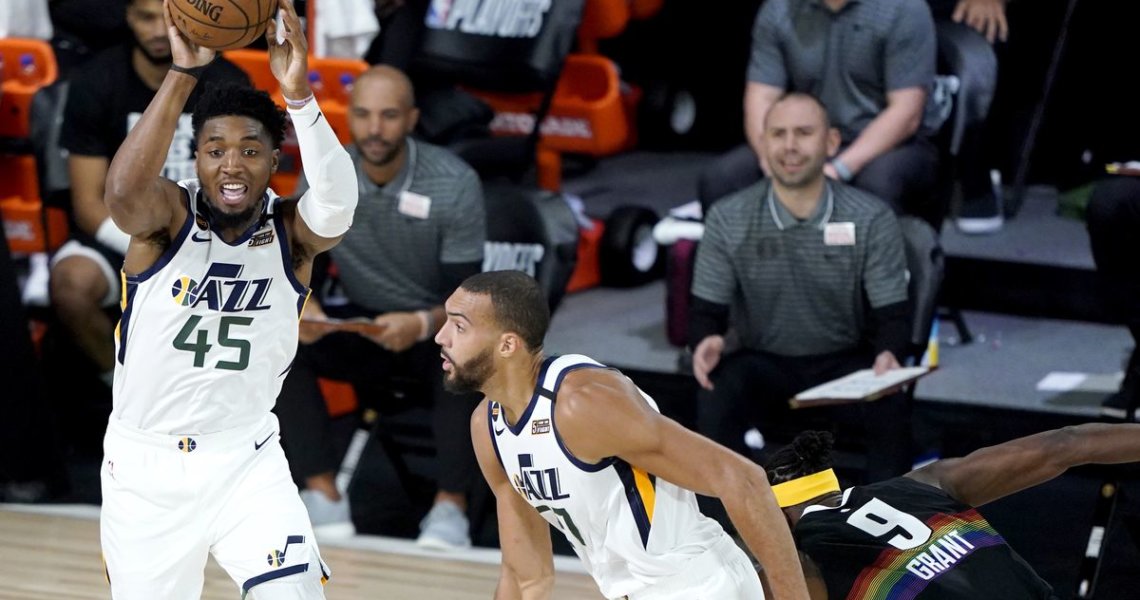 Welcome to Nightly Pro Notables: a collection of the hottest sneakers and biggest moments of the night on August 17, 2020.

Check below for all the highlights and sneakers worn on a busy day of postseason hoops.

Even in a loss, Donovan Mitchell did something that the likes of Kobe Bryant, LeBron James, and Kevin Durant have not accomplished.

Spida put up 57 points in a game 1 overtime loss to the Denver Nuggets. Only Michael Jordan (63) and Elgin Baylor (61) have scored more in an NBA Playoff game.

You can find the adidas D.O.N. Issue #2 that Spida rocked this game at StockX.

Before tonight Luka Doncic had never played a single postseason minute. Within two minutes, the Luka Magic was on though with point after point from the Slovenian. The game was close until fellow Maverick Kristaps Porzingis was ejected for defending Doncic, shoving the Clippers Marcus Morris Sr.

Doncic did his best to keep it lose though and finished with 42 points, 9 assists, and 7 Rebounds in his first playoff game ever.

Luka laced up a Jordan React Elevation PE this game. You can find other colorways at Nike Store and StockX.

Despite missing half of the bubble games, Jamal Murray didn’t miss a step against the Utah Jazz. Murray was hitting shots from every area of the court, powering his way to the game 1 win and a career-high 37 points.

The green “Powerade” adidas Dame 5 Jamal wore for this game isn’t available, but you can find other colors at StockX.

A year removed from his coming-out party in the 2019 playoffs, Fred VanVleet continued his postseason point barrage against the Brooklyn Nets. VanVleet torched the nets and the Nets with constant three-pointers, going a blistering 8-10 from long-range.

The AND1 Attack 2.0 that Fred rocked for this career game is currently unavailable.

You’ve heard of tall quarterbacks but have you seen a 7-footer throw a Hail Mary pass? Now you have. Nikola Jokic quickly used his vision after grabbing a board. The defensive back wasn’t looking at the ball here, allow Jerami Grant to snag the catch and convert for points.

The Nike Hyperdunk X model that Jokic wore this game can be found at at StockX, Flight Club, GOAT, and DicksSportingGoods.com.

Before his aforementioned ejection, Kristaps Porzingis got one over on last year’s NBA Finals MVP. KP stopped on a dime on this play at the foul line, causing Kawhi Leonard to topple over. Of course, Kristaps would nail the free throw line jumper, cementing this in his career highlight reel.

Porzingis wore the adidas N3XT L3V3L this game, which can be found at StockX and GOAT.

Serge Ibaka went back to his roots, while narrowly digging into Jarrett Allen’s roots (and afro) on this impressive block.

You can purchase the adidas Mad Bounce (2017) that Serge wore in this game at adidas.com and DicksSportingGoods.com.

New KAWHIs for the Klaw

Kawhi Leonard continues to wear more colorways of his first signature shoe with New Balance. THE KAWHI sneaker featured tonight comes in blue and gold and is dubbed the “4 Bounces” colorway for Leonard’s wild game 7 game-winner against the Sixers.

The New Balance THE KAWHI has not released just yet.

Montrezl Harrell has loved the custom kicks since the NBA lifted color restrictions. This time around, Trezz’s shoes had a social message with pink and black with Breonna Taylor’s likeness. “Say Her Name” is also featured throughout, a phrase popularized on social media to apply pressure to lawmakers to arrest the cops who killed Breonna.

This custom isn’t available, but you can find other colors of the Reebok Question at StockX and GOAT.

Kobes of the Night

Almost every single night of these Pro Notable posts have included a Nike Kobe 5 Protro and tonight is no different. One of the more popular shoes in the NBA, this time it is Norman Powell rocking the “Bruce Lee” colorway in yellow, black and red.

You can find the Nike Kobe 5 “Bruce Lee” at StockX and GOAT.