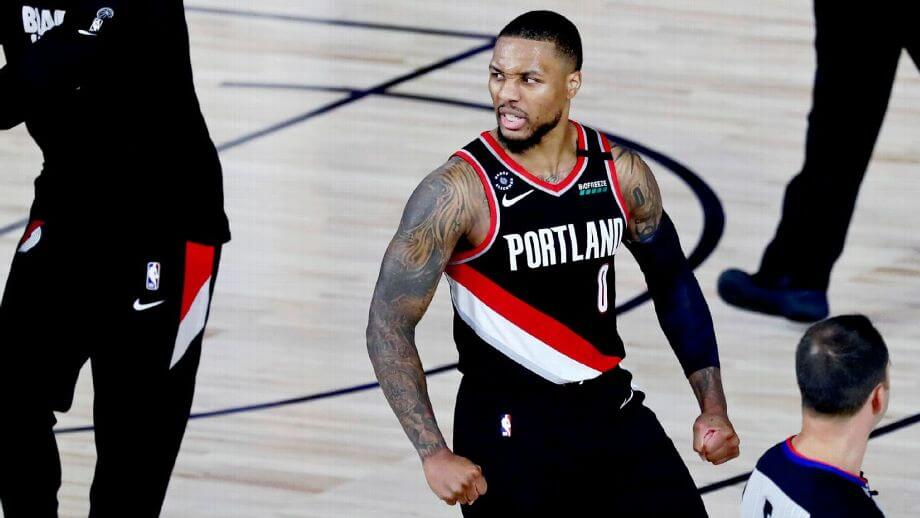 Welcome to Nightly Pro Notables: a collection of the hottest sneakers and biggest moments of the night on August 11, 2020.

What a day of basketball, with four teams playing for their playoff lives in the western conference. This produced HUGE games for Damian Lillard and Devin Booker, Dame even made NBA history tonight with numbers that Kobe Bryant nor Michael Jordan accomplished in a season. Check below for these highlights and the sneakers worn in these moments.

What a game. Damian Lillard really responded since missing two clutch free throws that led to the Clippers loss. After dropping 51 on 76ers, Lillard put up 61 against the Mavericks in a pivotal game for the 8-9 seed play-in.

Lillard couldn’t miss and even made this desperation three-pointer off a bounce that completely leaves the camera frame some 10 feet in the air.

Lillard ended up matching his career high in points. Dame is the 2nd player in NBA history to have three 60+ point games in a season (Wilt Chamberlain is the other.) All while missing 9 regular season games due to the league shutdown. Let’s see how much Damian puts up in the Blazers final seeding game against the Brooklyn Nets.

The all-black adidas Dame 6 worn in this game hasn’t released, but you can find other colorways at StockX and Dicks Sporting Goods.

Before that Blazers game, the shine was all on Devin Booker and the undefeated Phoenix Suns. D Book has been on another level and put up 35 more points to push his team from 12th to tied for 9th before the bubble to now.

Booker made all the wild 3-pointers but also threw down today on the Sixers Furkan Korkmaz and Novel Pelle.

The blue and orange Nike Kobe 5 Protro isn’t currently available, but you can find that style at StockX,GOAT, and Flight Club.

Outside of Booker and Dame, the other bubble MVP candidate is Luka Doncic. On this play, Luka shows his deceptive movements, no matter how slow they are. Doncic makes this look easily, spinning on Lillard with a quick lane for a layup.

You can find the Jordan Jumpman Diamond that Luka Doncic wore for this game at StockX.

Kemba Walker showed off his slick handles today against the Memphis Grizzlies. With Brandon Clarke switched on him, Walker toyed with the forward with quick crossovers. Kemba then hit the jab step hard before pulling back for the mid-range jumper.

Walker rocked a green and white Air Jordan 34 PE, but you can find other colorways at StockX and Dicks Sporting Goods.

Lonzo Ball just missed out on playing with the late great Kobe Bryant, but his respect level was always high. The former Laker rocked Kobes even when he had his Big Baller Brand shoe and has wore Mamba shoes since that company dissolved.

Today, Ball wore the “Big Stage/ Championship parade” Nike Kobe 5 Protro, which has a split look similar to the Jordan 1 “Homage To Home.” This white, black and gold colorway can be found at StockX.

Ja Morant let his shoes do the lacing for him with the Nike Adapt BB 1.0 sneaker. This self-lacing sneaker was customized to match Memphis’ jerseys with dark and lighter blue shades. The shoes looked even better with Morant airborne:

While this custom isn’t available for sale, you can find other colorways of the Nike Adapt BB at StockX, Flight Club, and Stadium Goods.