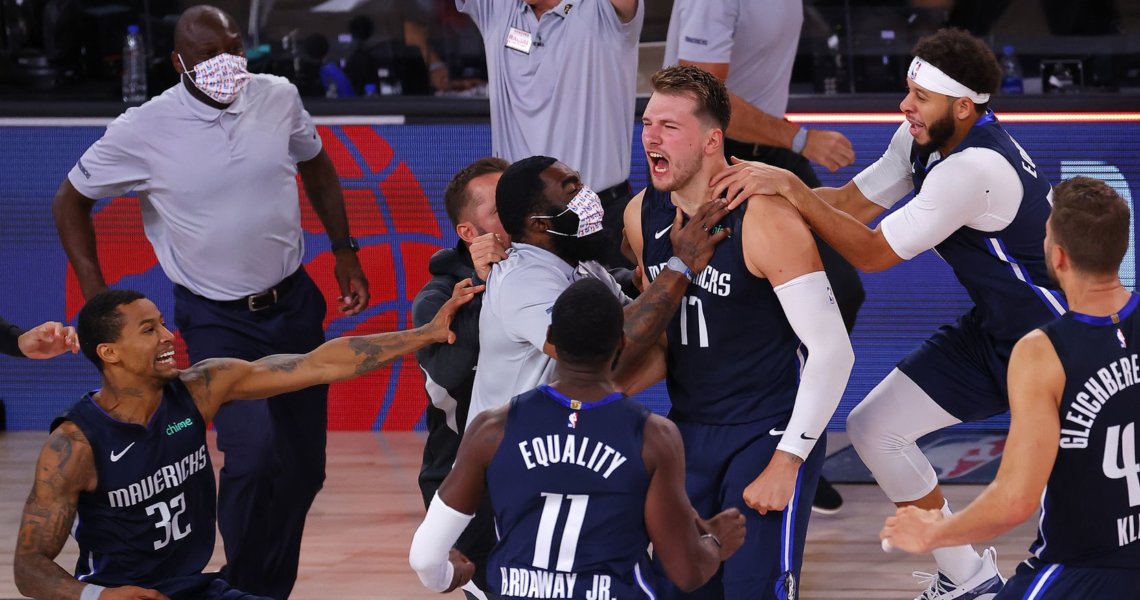 Welcome to Nightly Pro Notables: a collection of the hottest sneakers and biggest moments of the night on August 23, 2020.

On a night surrounded with Kobe Bryant tributes, Luka Doncic had a chefs kiss worthy game that is worthy of documentaries. The type of game you’d say was too unbelievable if written as fiction.

Check below for all the highlights, as well some WNBA love for the Black Mamba.

Very few times will you see absolute perfection from an NBA player. Not necessarily a perfect field goal percentage, but just the perfect numbers with the perfect ending. That was the case tonight for Luka Doncic.

The moment was preceded by the perfect setback as well, the stuff of movies. In game 3, Luka Doncic hurt his ankle and couldn’t get back in the game. As a game-time decision for game 4, expectations weren’t high for the Dallas Mavericks star.

Then we remembered Luka Magic was a thing and Doncic went to work, even with Dallas down 21. The game went into overtime and number 77 had the ball with the game clock ticking down. Doncic went to his signature stepback 3, even with with the Clippers only up 1.

to quote Mike Breen; “BANG! BANG! IT’S GOOD.” The ball hit the back iron and in as the final score showed Dallas 135, Los Angeles 133.

He did this in the Jordan React Elevation sneaker, with the Hyper Violet and Flash Crimson colorway he wore tonight available at Nike store and StockX.

In another historic game, Jamal Murray and Donovan Mitchell put on a show for their teams, scoring at will for their squads.

Murray put up an even 50, while Mitchell literally one-upped him with 51. Donovan Mitchell all but iced the game with a three-pointer to put the Utah Jazz up 4 with 54 seconds, but the dueling shots were a lot of fun to watch.

Donovan wore the “Orange Crayola” colorway of the adidas D.O.N. Issue #2, which hasn’t released yet.

Murray wore a custom adidas Pro Model 2G, with George Floyd’s face painted on the shoes. You can find the base color Pro Model 2G at Dick’s Sporting Goods.

Hearts were heavy today, with August 23 being Kobe Bryant’s birthday. The Black Mamba would’ve been 42 today, so Diana Taurasi decided to show-out in a number 8 jersey (she has always worn number 3.)

Kobe always had admiration for Diana’s game and vice versa, with Bryant even featuring Taurasi’s confidence in his Musecage video series.

The presumptive GOAT of the WNBA scored a team-high 34 points, as her Phoenix Mercury got the W over the Washington Mystics.

Taurasi stunted in the Kobe jersey, but rocked the Nike LeBron 17 on-court per usual. You can find this silhouette at StockX, GOAT, Stadium Goods, Flight Club, and DicksSportingGoods.com.

Jokic Stunts on Gobert After Slam

The usually mild-mannered Nikola Jokic, did some flexin’ in today’s game. After backing down Rudy Gobert in the post, the Jazz Center toppled over to draw the charge. With no call, the Joker spun into a two handed slam over Gobert before pulling up on the rim and yelling. Now you can say this was to avoid landing on Rudy underneath the rim, but Nikola did have a pep in his step after the emphatic slam.

Jokic pulled up on Gobert in the Nike Hyperdunk X, which you can find at StockX, Flight Club, and GOAT.

It makes sense that there are plenty of WNBA tributes to Kobe Bryant, as he was one of the biggest champions of women’s basketball. Longtime Los Angeles Sparks player Candace Parker rocked the adidas Pro Model 2G in the purple and gold of both the Sparks and Lakers. Custom number 8 patches adorned the heel area.

This custom isn’t available, but you can find other colors of the Pro Model 2G at Dick’s Sporting Goods.

Arike reminisces on Her Mamba Moment

The friendship between Arike and Kobe started after she hit a game-winner against the perennially great UConn women’s team in the 2018 Final Four. Bryant was watching and had to tweet about the wild moment:

Arike’s Notre Dame squad would go on to win the championship game, celebrating on the Ellen Degeneres Show WITH the man himself.

Back to the tunnel fit, she rocked an LA hat and the Black Mamba Lakers jersey with 8 on the front and 24 on the back. After the tunnel, she wore the UNDFTD x Nike Kobe 5 Protro in Hornets colors.

You can find this “Unlucky 13” Nike Kobe 5 Protro at StockX.