James Harden’s rookie look may not be recognizable from the Harden we all know today. The Beard… didn’t have much of a beard and his mohawk hairstyle had not developed yet. Harden was still rocking with the Oklahoma City Thunder, coming off the bench for defensive-minded guard Thabo Sefolosha. James was still on team swoosh as well, rocking the game-changing original Nike Hyperfuse for the rookie campaign.

The shoe (along with the original Hyperdunk) started a wave towards synthetic, plastic uppers that proved to be more durable than the leathers in past performance models. “Fuse” soon become short-hand for this synthetic construction, which often featured mesh overlays for added breathability.

Harden had a decent season in the Hyperfuse, averaging a touch under 10 points again. As shocking as that may sound compared to what he’s recently been averaging with the Rockets, Harden’s explosiveness probably is just as shocking.

In terms of synthetic team shoes, Harden would also rock the Nike Air Max Rise, Hyperize, and Hyperfuse Low in his years in OKC. 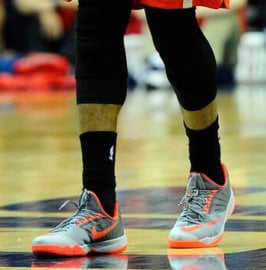