One of the sneakers Luka Doncic has rocked in multiple seasons is the Nike Kobe 4 Protro sneakers.

The Nike Kobe 4 originally released for the Black Mamba’s 2008-09 season and was revolutionary for it’s low-cut design. This was a direct request from Kobe Bryant, who saw how soccer players played faster with a lower-cut boot. The Kobe 4s worn by Luka were a “Protro” version, which slimmed the heel shape and increased the range of the traction. The heel Zoom Air and soft phylon foam remained in the cushioning, providing lightweight bounce when landing on the heel. The upper features synthetic leather uppers, with Flywire panels in the midfoot for added lockdown.

Luka has mostly laced up player exclusive colorways, including an released white and turquoise pair at the 2019 Skills Challenge.

Luka Magic was on full display in this "blink-and-you'll-miss-it" dime pass from Doncic. On this play, Luka drove down the lane from 30-feet immediately after receiving a pass from a Dallas Mavericks teammate. New Orleans big man Jaxson Hayes went to switch, leaving his man to cover Luka. This allowed Doncic to w... Read more

Luka Magic was on full display against the Golden State Warriors, with Doncic making history. Doncic had been on a tear leading up to this game, recording 6 triple doubles in just 13 games in the 2019-20 season. After numerous dimes, buckets, and rebounds the Mavericks were thoroughly beating the Dubs. Luka would... Read more

Very little stings more to a defender than a shot made in your face followed by a shrug. Michael Jordan did it to the Blazers in 1992 and Luka Doncic mimicked it in 2019. On this play, Doncic dribbled the ball to the top of the three point line. Boston Celtics Guard Jalen Brown was ready for him but bit on a hesi... Read more

Luka Doncic lived his childhood dream of not only playing against LeBron James, but crossing him over. On this play Luka brought the ball up the court and utilized a screen from Dallas Mavericks teammate Maxi Kleber. In an instant, Lakers Guard Avery Bradley was stuck like velcro, forcing James to switch over. Do... Read more 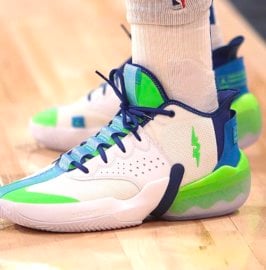