Very little stings more to a defender than a shot made in your face followed by a shrug. Michael Jordan did it to the Blazers in 1992 and Luka Doncic mimicked it in 2019.

On this play, Doncic dribbled the ball to the top of the three point line. Boston Celtics Guard Jalen Brown was ready for him but bit on a hesitation move. Luka smoothly transitioned to his left with a stepback. Doncic then took the jumper feet away from the three-point line. Brown tried contesting but was a foot away from the hesi. The shot went straight through the net. As Luka was backpedaling, the camera caught the Dallas Maverick smiling while shrugging his shoulders.

The Kobe 4 Luka wore in this game was the “Protro” version, which slimmed the heel shape and increased the range of the traction. The heel Zoom Air and soft phylon foam remained in the cushioning, providing lightweight bounce when landing on the heel. The upper features synthetic leather uppers, with Flywire panels in the midfoot for added lockdown.

The FTB (Fade to Black) black snake skin colorway Luka wore in this game can be found HERE.

You can find other Nike Kobe 4 Protro colorways at StockX, GOAT, Stadium Goods, and Flight Club. 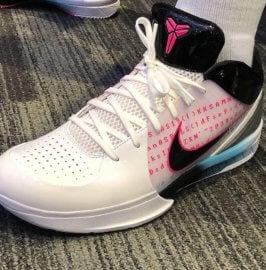