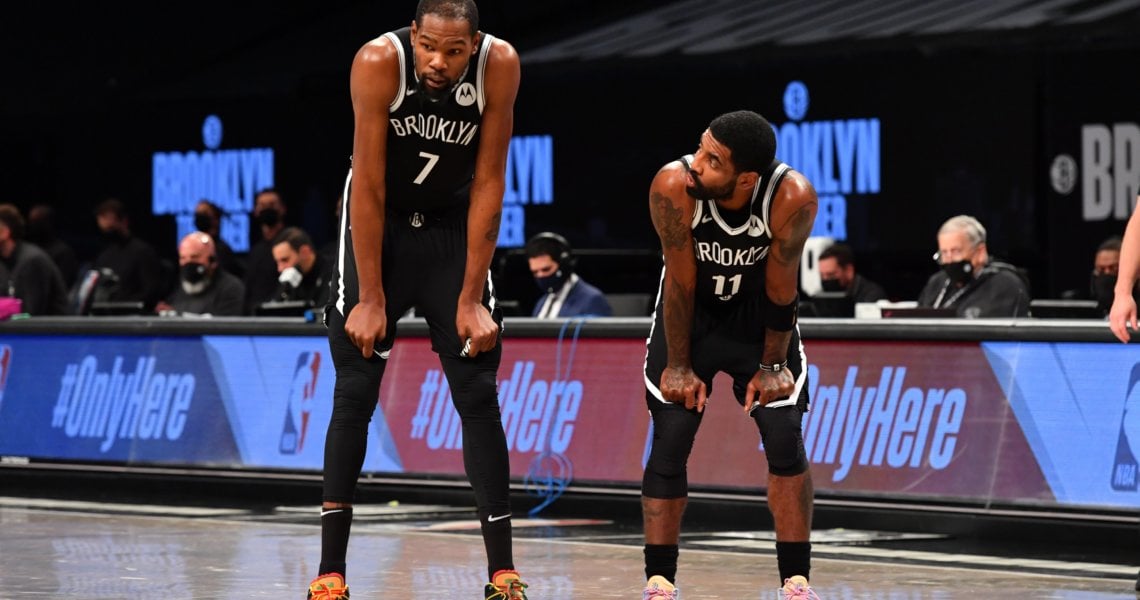 Welcome BACK to Nightly Pro Notables: a collection of the hottest sneakers and biggest moments of the night on December 22, 2020.

It’s opening night after a very short offseason and the Lakers looking to repeat their bubble championship. We also saw Kevin Durant and Kyrie Irving return to the court opposite Steph Curry and the new-look Warriors.

In the second game, the Clippers played spoilers with a huge game from Paul George after a ton of ridicule for his playoff performance. We also got some huge slams from some young Dubs on the first night in the 2020-21 NBA season.

It’s been 552 days since Kevin Durant was helped off the court in the NBA Finals. With his Achilles injury finally healed, Durant showed off his vintage speed, length and sharpshooting.

This new-look Nets team with Irving, Durant, and Nash at the helm will be interesting to watch – especially after tonight’s blowout win over the Warriors.

Kevin wore the Nike KD 13 “Rasta” in his return, which you can purchase at Dick’s Sporting Goods.

Despite passing the ball to the referee tonight, Paul George was on top of things on offense. This was particularly true in the 3rd quarter when George went a perfect 6-6 at one point to help his Clippers pull away.

George debuted his new sneakers for opening night, which you can see later in the article.

The “Shanghai” purple Converse All-Star BB Evo that the Tsunami Papi wore isn’t available, but you can find other colors at StockX.

James Wiseman didn’t have Summer League, training camp, or even college really to ease him into the league. With that said, Wiseman’s size made his first bucket rather easy. James rolled to the rim to score two less than a minute into his career. Throw it down, big fella.

The Warriors colored Nike Kobe AD he wore tonight isn’t available, but you can find other colors at StockX.

LeBron James is fast approaching two decades in the league, but he still has hops in year 18. The King ran with a fast-break pass from new teammate Dennis Schroeder and threw it down with a right-handed, cockback slam.

James rocked two gold PEs for his ring ceremony, which isn’t currently available. You can find other colors of the Nike LeBron 18 at StockX.

First Look at the Nike PG 5

Looking to wash away the disappointing 2020 playoffs, Paul George debuted the PG 5 tonight against the Lakers on ring ceremony night.

This navy and orange colorway he wore in warmups doesn’t have a release date just yet. Neither does the purple, orange, and teal pair during the game, but his black and white colorway is set to release on January 21.