Few basketball players see a shoe with their signature namesake, let alone reach double digit signature models with a sneaker brand. Chris Paul has reached that mountain and then some with his latest Jumpman-adorned shoe, the Jordan CP3.XII. Compared to the CP3.XI, the latest Chris Paul sneaker no longer features a strap. Instead, the upper is upgraded with performance Knit that is similar to that on the Nike LeBron 15. Leather wraps around the quarter panel, while an extra layer is added to the medial side for extra stability. 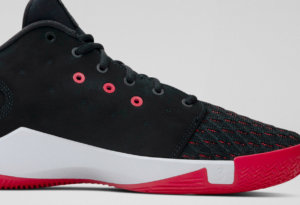 A Zoom Air unit is used in the forefoot, with a new wave traction pattern utilized for much-needed court grip. Three colorways will drop later in the summer: the black and red “Unfinished Business”, the wolf grey “Leader of the Pack”, as well as the returning multicolor “Dr. Jekyll and Mr. Hyde” versions seen below.