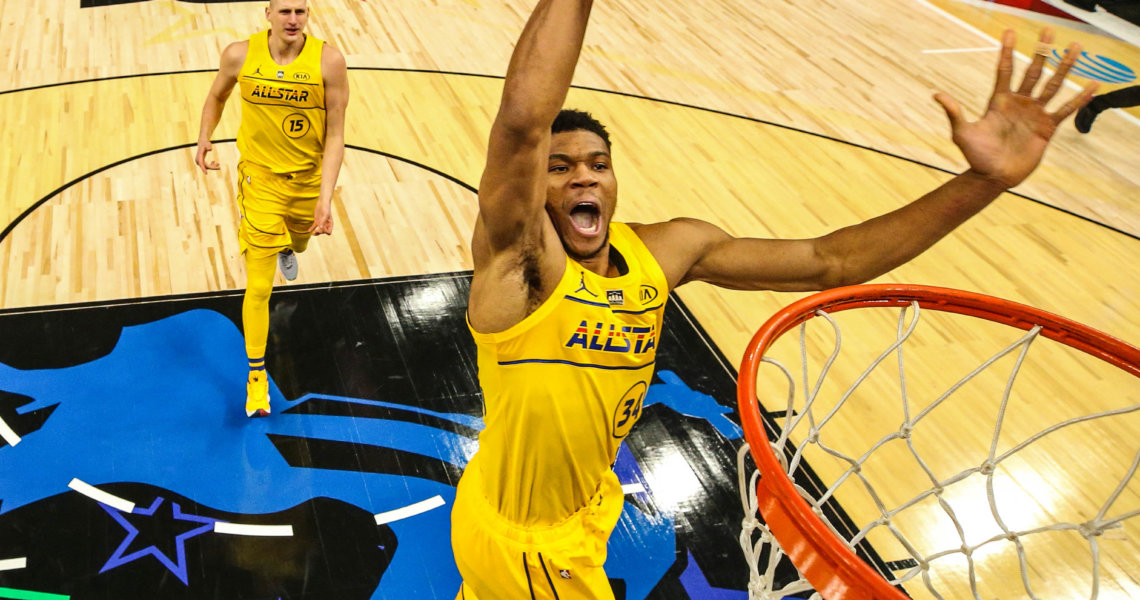 The NBA switched things up this year, stuffing all of the All-Star festivities in one night to reduce COVID exposure. With the Dunk Contest at halftime, the 2021 NBA All-Star Game concluded the festivities in Atlanta, GA.

This game was pretty much a blowout, with the stacked Team LeBron squad winning the first three quarters and the game. Even most of the moments came from Team LeBron, including a half-court shootout from Steph Curry and Damian Lillard

Check below for the highlights, as well as every sneaker worn by the 2021 All-Stars on both Team LeBron and Team Durant.

The Greek Freak made history tonight, by literally not missing. This is the first time any player has made 10+ shots shooting 100% from the field.

Giannis even made three 3-pointers, going ballistic with excitement after each one. Making history sure does help in winning the All-Star MVP award, hoisting the Kobe Bryant trophy by night’s end.

You can find the purple version dubbed the “Play For The Future” at Nike Store.

If it wasn’t for Giannis’ record-breaking game, Damian Lillard likely would’ve hoisted the Kobe Bryant trophy with his 32-point performance. This is the most points in an All-Star Game ever for a Trail Blazer. After a slow start, Lillard caught fire and just kept extending his range until he reached half-court.

Even without a game clock in the 4th quarter, Dame Time was still in full effect with Lillard sinking a 40-foot bomb to win the game:

Lillard rocked the blue Ric Flair x adidas Dame 7 for this clutch shot. You can find this sneaker at StockX and GOAT.

The man who challenged Lillard from long-distance was his teammate Stephen Curry. The Golden State Warriors great started off scorching hot, hitting 3s from all parts of the court including the corner where he won the 3-Point Contest earlier in the night.

Steph rocked his signature Curry Flow 8 this game, switching from the “International Women’s Day” colorway from the 3-Point Contest to the “Wish Flow.” This white sneaker can be found HERE.

Other Curry Flow 8 colors are available at StockX and GOAT.

Team LeBron won the All-Star game for the fourth straight year, all with their team captain chilling. LeBron James only dropped 4 points, opting for rest while watching his young teammates hooping. He still got in a signature Dunkman flush though:

The King wore a Blue Tint, All-Star Nike LeBron 18. Dubbed the “Play for the Future”, you can find this colorway HERE.

Another starter with a quiet night was Luka Doncic, who had a quiet 8 points. The All-Star energy seemed to lift Luka though, quite literally has he had a rare dunk:

Doncic wore a purple PE Air Jordan 35 this game. you can find other colors at StockX and GOAT.

The final starter, Nikola Jokic dropped 5 dimes with his 6 points. While quiet, the Joker still hoisted the Kobe Bryant trophy by night’s end (before handing it back to Giannis.)

Jokic wore his Nike Zoom Rize 2 PE in yellow and grey this game.

No word on a release for this colorway, but you can find other colors at GOAT.

Chris Paul had himself a night with 16 assists on his 11th All-Star appearance. All those dimes helped CP3 pass Magic Johnson for all-time assists.

Like Luka, even Paul had to show out with a dunk of his own:

Chris wore a grey colorway of his Jordan CP3.XIII, a style that hasn’t released.

Jaylen Brown turned it on late to score 22 points off the bench.

Brown’s kicks featured custom “HUMBLE & HUNGRY” text on the adidas T-MAC 2 in mismatched red and blue colors. This is an homage to Tracy McGrady’s 2004 All-Star appearance in the same colors, although he wore the T-MAC 3.

These exact colors aren’t available, but you can find other colorways of the adidas T-MAC 2 at StockX and GOAT.

Paul George made his 7th All-Star appearance in his signature Nike PG 5. The All-Star/ Play for the Future colorway in teal can be found at StockX and GOAT.

Domantas Sabonis repped his Indiana Pacers team for his 2nd All-Star game. This was after he won the 2021 Skills Challenge earlier in the night.

Sabonis continued to wear the white Nike Kobe 6 Protro PE all night, which isn’t available. You can find other colors of the Nike Kobe 6 at StockX and GOAT.

Rudy Gobert made his 2nd straight All-Star appearance, this time rocking the Nike Zoom Rize 2 in a grey PE colorway.

You can find other colors at GOAT.

With Kevin Durant out with a hamstring strain, Kyrie Irving looked to pick up the slack with 24 points on the night.

The Atomic Orange “All-Star’ Nike Kyrie 7 that Irving wore can be found at GOAT.

The leading scorer on Team Durant just happened to be the leading scorer in the NBA. Bradley Beal put up 26 points in his first All-Star start, all while wearing a grey and black Air Jordan 35 PE.

Durant and Irving’s new Brooklyn Nets teammate James Harden was back in his bag with a barrage of All-Star 3s.

The cartoon flower adorned, Solar Yellow adidas Harden Vol. 5 that the Beard wore in Atlanta can be found at GOAT.

Mike Conley seemed destined to be known as the best player never to make an All-Star Game. That was until Devin Booker was scratched from the 2021 game, needing a replacement. Insert Conley, who had been a borderline All-Star in most of his 14 season in the league.

Conley rocked a white and black Air Jordan 35 in his narrow loss in the 3-Point Contest, also wearing the PE in the actual All-Star Game.

This colorway hasn’t dropped, but you can find other colors of the Air Jordan 35 at StockX and GOAT.

Last year’s All-Star MVP had a slightly quieter night in 2021, with Kawhi Leonard dropping 8 points on the night.

The “Neo Flame” New Balance The KAWHI sneaker that Leonard wore will release in late March.

The “Women in Power” Air Jordan 35 that Tatum rocked can be found at StockX. The nickname can be found between the laces and toe box, with Jayson Tatum’s logo on the tongue.

Zion Williamson may not have the media hype from his rookie season, but his play has warranted his first All-Star bid in 2021. Williamson missed his first five shots before collecting a handful of lobs for vicious dunks:

After feeling snubbed the prior year, Zach LaVine finally made his All-Star debut in Atlanta.

LaVine rocked the adidas Crazy BYW 2.0 tonight, in his LaVine Airlines player edition colorway. You can find other colors of this sneaker at StockX.

Donovan Mitchell earned his 2nd straight All-Star Game pick, being the best player on the best team in the NBA.

The red and green adidas D.O.N. Issue $2 he wore tonight isn’t currently available, but you can find other colors at StockX and GOAT.

Randall payed homage to his former teammate Kobe Bryant by rocking the red Nike Kobe 6 Protro. This colorway was worn by Bryant himself way back in 2011.

You can find this colorway at StockX and GOAT.

Last but not least, we have Orlando Magic big man Nikola Vucevic, who made his 2nd All-Star appearance. Vucevic placed 2nd earlier in the night in the Skills Competition.

Nikola wore the “Chinese New Year” Nike Kyrie 7 for the game and Skills Challenge, which can be found HERE. 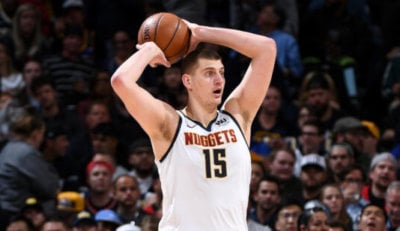