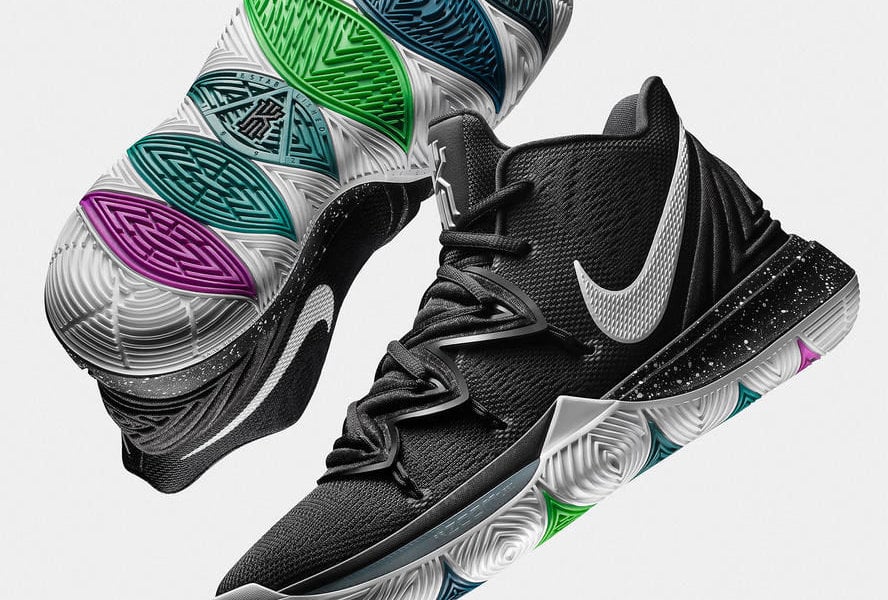 Lock In with the Nike Kyrie 5

Prepare to catch the defenders slipping with the latest sneaker in Kyrie Irving’s signature line, the Nike Kyrie 5.

The shoe adopts many of the design elements from past models, like the traction riding up the sides of the midsole, with the deep grooves assisting on superior traction. Design elements include triangular shapes on the traction and heel, with an eye placed that reminds many of the Illuminati symbol. This is more of a nod to the Hamsa Hand that Kyrie has tattooed on his arm, a symbol in the Middle East and Africa to both provide success and ward off evil forces.

The newer features show a gradual evolution from previous shoes, with the new Zoom Air cushioning and FlyTrap upper being standouts. This time around the Zoom unit is placed in the forefoot instead of the heel. The newly dubbed “Air Zoom Turbo” unit is large enough to wrap across the sides of the forefoot and is curved to provide responsiveness in all directions. This helps quick players like Kyrie, who have a start-and-stop game.

The new lockdown Venus Flytrap plays off of Kyrie’s origins, as Irving was born in Australia where the plant is typically grown. Much like how that plant claims down on flies with its’ jaws, the hooks connected to the Flywire will drop your foot closer to the Zoom Turbo unit to maximize responsiveness in the forefoot.

The Nike Basketball team promises to create colorways of the Kyrie 5 that take personal inspiration from past passions as well as contemporary creative forces. The shoe will retail for $130, with the “Black Magic” colorway launching on November 22.