Overtime is Dame Time once more, as Damian Lillard added another clutch shot to his highlight reel.

To even get into the overtime, the Portland Trail Blazers had to score down 102-104 to the Denver Nuggets. With just 2.1 seconds on the clock, Lillard curled around a Meyers Leonard screen then rushed to the rim on an inbound lob. This pass led to the game-tying layup from Lillard.

The close battle eventually led to a 113-113 overtime score with the shot clock turned off. Dame has the ball with Kenneth Faried in a defensive stance, just hoping for the best. Lillard lulled Faried with fake hesitation moves and some shake-and-bake dribbles between his legs. Dame then drove left past the Manimal, floating the ball just over Faried’s outstretched arm. 0.3 seconds remained, but Lillard knew he just iced the Nuggets. All that remained was Damian tapping his wrist to signal that Dame Time has concluded.

The sneaker Damian wore for this highlight was the adidas D Lillard 2. The jacquard woven upper was more inexpensive than Primeknit, but provided the same soften and durable attributes that Dame needed. This budget-friendly signature shoe boasted Bounce technology to provide a responsive, yet plush feel. Some version replaced Bounce with Boost to ramp up the soft cushioning.

Damian rocked the grey heather “Stay Ready” colorway for this moment, which you can find here.

You can find other colorways of the adidas D Lillard 2 at StockX and GOAT. 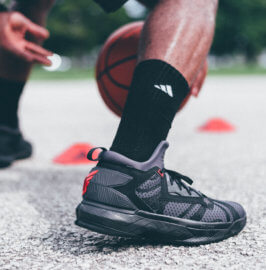