It’s two highlights for the price of one in this crazy play from Damian Lillard.

Dame first hard dribbled right to catch Celtics Guard Avery Bradley off-balanced. Lillard then spun left without picking up the dribble to have a nearly wide-open lane to the rim. Tyler Zeller drifted weak-side to contest, but Dame was too explosive and quick. The six-foot Blazers guard packed a right-handed slam over the seven-foot Zeller. Once Damian landed from the dunk, he made sure to flex both arms for the raucous Moda Center crowd.

The sneakers Damian Lillard rocked for this poster dunk was the adidas D Lillard 1. Dame’s first signature shoe featured adiPrene+ cushioning for slightly firmer set-up than adidas Boost. Synthetic leather was used on the upper to harken back how shoes were made in the 90s. The simple set-up allowed the D Lillard 1 to retail for just $105 when they dropped in 2015.

The red and white colorway was exclusive to the mi adidas customization site, but you can find other colors of the adidas D Lillard 1 at StockX and GOAT. 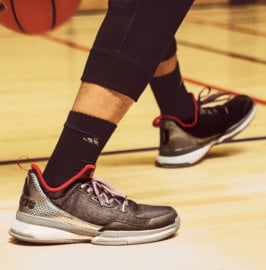