Jayson Tatum got two highlights for the price of one in this game against the Oklahoma City Thunder.

On this play, Tatum received a dribble handoff from teammate Al Horford. Jayson attacked so hard off the screen that defender Corey Brewer buckled, dropping to the hardwood as if he was playing twister. By the time Brewer collected himself, Tatum was already rising up for a right-handed jam. The normally quiet Tatum yelled loudly after landing, even stomping a few times for the hometown TD Garden crowd for good measure.

The footwear Jayson laced up in this game was the Nike Kyrie 3. This shoe focuses on exceptional traction, which rides up the side walls for control even while side-stepping. Independent traction pods appear as triangles on the forefoot to further enhance court grip during hard cuts. Flywire cables appear at the two lace holes close to the toe, helping lock down that area for a closer fit. A Zoom Air unit appears in the heel for a snappy feeling when landing and running.

Tatum rocked a black and green swoosh player exclusive for this game, but you can find other colorways of the Nike Kyrie 3 at StockX, Flight Club, and Stadium Goods. 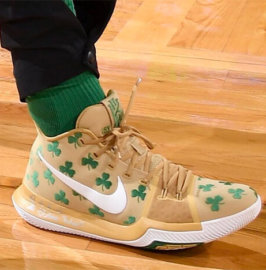