With the bright lights shining in game 6 of the 2014 Western Conference Finals, the Spurs put on the after burners in a momentum-shifting play by Kawhi Leonard.

After a quick hand-off from Tony Parker, Leonard went to work first by spinning past a frozen Kevin Durant. Russell Westbrook tried to grab a steal but to no avail. The only thing standing in Leonard’s way to the bucket was shot-blocker Serge Ibaka. Leonard’s future teammate rose up, but was a second too late on the contest. Kawhi subsequently slammed the ball in Ibaka’s grill to help with the eventual San Antonio win.

The sneakers Leonard wore during this poster dunk was the Air Jordan XX8 SE, a shroud-less version of the 28th signature shoe in the Jordan line. This was the first shoe to utilize Unlocked Zoom, which provided a direct bouncy feel in the forefoot.

Leonard rocked the “Pure Platinum” XX8 SE, which isn’t available at retailers. You can find other colorways of the Jordan XX8 at StockX, Flight Club, and Stadium Goods. 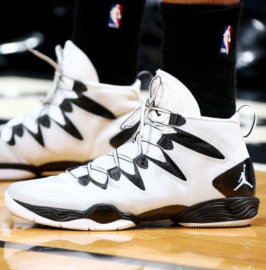