The King shined in his first matchup with the New Orleans Pelicans’ Zion Williamson.

The 2020 rookie phenom on this play got caught freelancing and turned the ball over. Lakers Internet legend Alex Caruso came up with the ball and raced up the court on the fast break. As he approached the free throw line, Caruso went between his own legs for a self-nutmeg pass. LeBron James then exploded to the rim as former teammate Josh Hart tried to take the charge. Hart tried turning to the side once James took flight but he was already on the poster. LeBron packed a right-handed slam over Hart, to the elation of the Staples Center crowd. The damage after the game for James: 40 points and a big W.

The sneaker James rocked for this poster dunk was the Nike LeBron 7. This signature shoe arrived on the scene in 2009 with nearly universal acclaim due to the similarities to the Air Jordan 11. The mudguard is similarly cut with the AJ 11 and many colorways of the LeBron 7 featured patent leather as a homage to the Jordans. The shoe also took a shift in adding full-length Air, replacing the Zoom Air set-up on most of the past LeBrons.

The white and gold “China Moon” colorway in this highlight can be found HERE.

You can find other colors of the Nike LeBron 7 at StockX, Flight Club, and Stadium Goods. 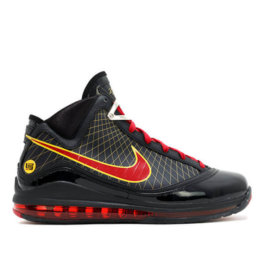