LeBron James still brought it on both ends in year 14, as shown in this 2017 sequence against the Boston Celtics.

On the offensive end, LeBron easily got past James Crowder for a sweeping right-handed dunk. The King then jogged back, watching the ball the entire time. Marcus Smart tried to go coast-to-coast for the layup. The King timed the shot perfectly, and blocked Smart’s stuff emphatically with two hands straight out of bounds. LeBron’s momentum carried him into the crowd where Celtics and Cleveland Cavaliers fans alike offered high-fives after the play. James was more than happy to oblige, dapping most of the extended hands.

The sneakers James rocked for this dunk and block was the Nike LeBron 14. This shoe featured articulated Hex Zoom units in the forefoot and mid-foot. A larger Zoom Air unit is featured in the heel, combining for a bouncy, responsive feel throughout. The laser perforated upper added breathability to the shoe, while also helping with a closer fit to the foot. The dynamic mid-foot strap offered a natural stretch that helped provide lockdown for your foot.

The King rocked a white and blue PE for this game, but you can find the Nike LeBron 14 at StockX, Flight Club, and Stadium Goods. 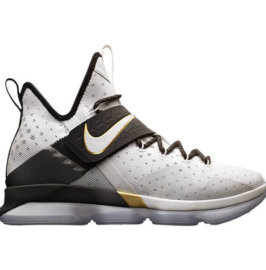