Cue another Michael Jordan highlight at the expense of Patrick Ewing and the New York Knicks.

On this play, Ewing was fighting vigorously for post position on the right-block. Mark Jackson finally was able to slide a post-entry pass his way so Ewing could put the moves on Dave Corzine. Ewing took one dribble, before fading away to the right. Little did he know that Michael had left his man and was running at Patrick full-stream. Right as the ball left his hands, his Airness rose up and viciously blocked the ball out of bounds. MJ put a little mustard on the swat by following through, with the momentum sending Ewing backwards.

The sneaker that Mike wore for this game was the Nike Air Alpha Force Low. This shoe is great for basketball trivia, as it is one of the few non-Jordan branded sneakers that MJ wore. The sneaker boasts a full-grain leather upper, as was accustomed to shoes in the 80s and 90s. An Air unit was used in the heel for impact protection.

The Nike Air Alpha Force Low isn’t currently available, but the inspired Jordan Legacy 312 Low (with an identical strap) can be found at StockX and GOAT. 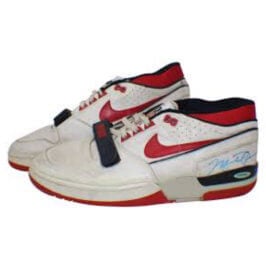