Much would be made about Michael Jordan’s Olympic Gold Medal with the Dream Team, but many forget his first time wearing gold in 1984.

This was when Team USA still limited eligibility to collegiate players, despite Michael getting drafted by the Chicago Bulls in June. Come August though, Mike showcased his skills on a global stage. On August 10, MJ scored a team-high 20 points in Team USA’s 96-65 gold medal win against Spain. Michael would end up leading the American squad in points per game at 17.1. Future Dream Teammates Chris Mullin and Patrick Ewing were 2nd and 3rd with 11.6 and 11 points per game, respectively

The sneakers that Michael Jordan wore for this game was the Converse Fastbreak mid-top. Like other basketball shoes in the 80s, the Fastbreak Mid features an all leather upper with a vulcanized sole. Jordan and his fellow Olympians had to wear Converse, as they were the official sponsor of Team USA Basketball in 1984.

You can find the Converse Fastbreak Mid at Converse.com and StockX. 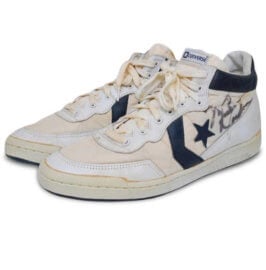