No shots are safe with a the leaping ability of Zion Williamson in play. The Gonzaga Bulldogs learned this well with a few shots getting swatted by the Duke Forward.

On one play, future Washington Wizards draft pick Rui Hachimura thought he had an easy layup. A trailing Zion covered ground quickly and slapped the ball from behind. In another instance, Zach Norvell Jr. tried a euro-step move which allowed Williamson to pack it against the backboard once more. For Zion’s third and most impressive block, Gonzaga ran a cut play to perfection. Geno Crandall had a wide open lane to the rim when Zion darted from behind to crush the ball and knock Crandall on his backside.

The sneakers Zion rocked for this moment was the Nike Kyrie 5. This style featured a unique Flytrap upper, a design that correlated Kyrie’s Irving to his birthplace of Australia. The shoe was designed for speed and court-feel, with a curved Air Zoom Turbo unit providing bounce in the forefoot in multiple directions.

A blue Duke PE was worn for this collection of blocks, but you can find other colorways of the Nike Kyrie 5 at StockX, Flight Club, and Stadium Goods. 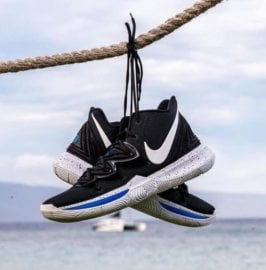