The basketball world collectively held their breath during a battle between UNC and Duke, as Zion Williamson’s Nike PG 2.5 exploded at the seams.

Just minutes into the rivalry game, Zion looked to dribble hand-off the ball at the top of the key. Williamson moved laterally when he planted hard on his left shoe. In that instant, the shoe blew out as Zion’s foot busted through the seams separating the upper and sole. The Duke Forward writhed in pain as NBA scouts and Barack Obama looked on from the stands.

Zion was eventually diagnosed with a grade 1 knee sprain and returned later in the season. His time on the shelf saw massive pressure to figure out what exactly happened. The fingers were pointed at Nike for the apparently bad craftsmanship. Skechers took a jab at the swoosh with an ad featuring the split sneakers. Even Paul George felt the need to respond about his signature sneaker blow-out.

A biomechanics professor named Nate Hunt did provide some explanation. He told SB Nation that Zion took a sidestep in the moment and likely applied double the force of his weight to the point that ripped. This adds a little more credence to Zion being a freak of nature similar to the legendary stories of Bo Jackson.

The Nike PG 2.5 utilized a forefoot strap for added lockdown as well as a responsive Zoom Air unit in the forefoot for a quick first step.

Zion specifically wore a white and blue Duke Player Exclusive colorway for this moment, but you can find the Nike PG 2.5 in other colors at StockX, GOAT, Stadium Goods, and Flight Club. 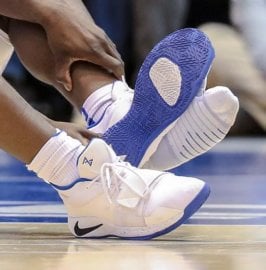