Halfway through an MVP season, James Harden added a career highlight to his 2017-18 campaign against the Los Angeles Clippers’ Wesley Johnson. After a few moves to keep his defender honest, Harden attacked the rim before stepping back with a between the legs dribble. Johnson proceeded to crumble to the hardwood, to the oohs and aahs of the opposing Staples Center crowd. The Beard stared Johnson down waiting for Wes to get up before drilling a 3 to cap off the highlight.

You can find the adidas Harden Vol. 2 at StockX, and Eastbay.

The “California Dreamin'” / “Melon” colorway that the Beard wore can be found here. 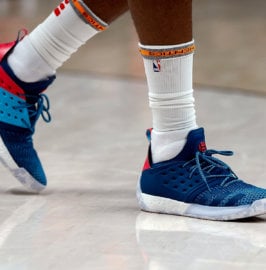