Kevin Durant has always been known for his unblockable jump shot. On one night, he did his best Allen Iverson impression by dropping dudes with his underrated crossover.

KD wanted to showcase his point guard skills on this play against the Portland Trail Blazers. Durant walked the ball up the court after the inbound. There was a method to Durant’s steps as he slowly saw the play develop in his mind. With Sasha Pavlovic parked at the three-point line, the Blazers guard committed to Kevin’s right drive. This would prove to be an overcommit as KD swiftly went left to right on a crossover that dropped Pavlovic. While he didn’t on his butt, the broken ankles had Sasha playing Twister with his right hand. In the immediate aftermath, Durant took one dribble to force a double team. Kevin then dropped a quick bounce pass to Nick Collison for the easy dunk.

Kevin Durant laced up the Nike KD 5 for this ankle-breaking moment. Much like past signature styles, the fifth version features a synthetic Hyperfuse upper and forefoot Zoom Air. This made the shoes durable for outdoor use, with extra responsiveness for forefoot first steppers. Max Air in the heel was added for impact protection when you do land on that section.

Durant wore a white and orange player exclusive for this moment, but you can find other colorways of the Nike KD 5 at StockX, GOAT, Flight Club, and Stadium Goods. 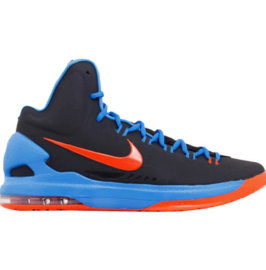