NBA fans everywhere were glued to the TV for Kevin Durant’s first game against his former team, the Oklahoma City Thunder.

This game took place in Oracle Arena, so much of the emotion came from the Thunder and former teammate Russell Westbrook. Durant was all business though, getting to work early with a 3-pointer. KD did it from all areas of the court, including fadeaway jumpers off of post-ups. The game was close going into the second before Durant took over. The Durantula dripped multiple three-pointers off of broken plays and turnovers, pulling away from his former squad. The game was eventually so out of hand that Kevin sat out for most of the 4th quarter. In total, Durant dropped 39 points in just 31 minutes. Statement made.

The sneakers Kevin Durant laced up for this highlight reel was the Nike KD 9. This model featured Flyknit for the first time in Durant’s sneaker line, utilizing a sock-like fit for soft comfort. The other standout feature is the flexible, full-length Zoom Air that gave the wearer a bounce to their step.

Durant rocked a player exclusive yellow KD 9 for this moment, which never released to the public.

Cover image via The Mercury News 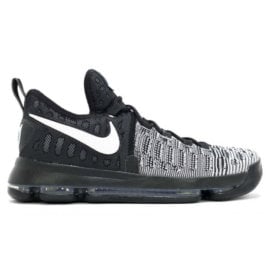