For a skinny guy, Kevin Durant has posterized many centers in his career. One such victim was Sacramento Kings big man Kosta Koufos.

The Oklahoma City Thunder squad started the play with beautiful ball movement. The rock swung around the three point line, keeping the Kings players on their toes. The ball eventually made its way back to the Slim Reaper. Omri Casspi was off-balanced and pretty much gave up after KD’s quick first step. The lane opened up for Durant who quickly met Kosta Koufas at the rim. Durant dunked so quickly that you’d miss the right handed spike dunk if you blinked.

The sneakers Durant rocked for this play was the Nike KD 8. This shoe featured a Flyweave upper for instant comfort, with added durability compared to a knit. Instead of a traditional heel cup, “teeth” resembling a sabertooth tiger’s were used to provide stability. The sabertooth tiger is one of Durant’s favorite animals, which he has tattooed on his leg. Segmented full-length Zoom Air gave Kevin responsiveness for a quick first step, with the cut sections allowing for more flex to the shoe.

Kevin Durant rocked a orange player exclusive for this matchup, which was not made available to the public.

Cover image via The Oklahoman 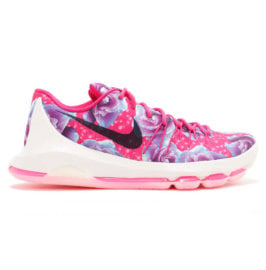