One of the craziest shots in Kevin Durant’s 2014 MVP season saw the Slim Reaper nail a four-point play in the clutch.

The Oklahoma City were in dire straits down 5 with 18 seconds remaining. Durant passed the ball to teammate Russell Westbrook, who then touch passed back to KD. This was tipped and Russ scrambled to direct the ball towards Durant. The ball fell in Kevin’s direction and Durant looked to launch from long range. Grizzlies big man Marc Gasol tried to steal the ball but hit KD’s hand during Durant’s shooting motion. Gasol meekly raised his hands out of the cookie jar but the referee’s whistle blew. The Durantula fell out of bounds as the ball fell straight through the net. The Thunder would go on to lose game 2 of this first round series, but this four-point play was cemented in KD’s long list of historic shots.

The sneakers Kevin Durant laced up for this highlight was the Nike KD 6. This is one of the lowest-cut sneakers in the KD line. The collar along with the asymmetrical lacing drew visual comparisons to soccer cleats. What carried over from the KD 5 was the heel Air and forefoot Zoom Air set up for added impact protection and responsiveness. A Hyperfuse upper featured Flywire strands embedded into the plastic material. This provided durability as well as added lockdown for a 1-to-1 fit.

Kevin Durant wore a white and orange player exclusive for this highlight, but you can find the Nike KD 6 in other colors at StockX, GOAT, Flight Club, and Stadium Goods. 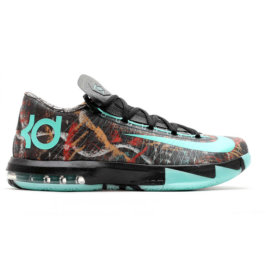