Kevin Durant spurring the New York Knicks is nothing new (see: 2019 free agency.) On a night in 2011, he sank the NY squad with a buzzer-beater.

With the score tied 98 all with 6.5 seconds left, the Oklahoma City Thunder had the ball and inbounded to Russell Westbrook. Kevin Durant got the ball just as quickly from Russ, who backed up for the isolation. KD instantly started the hesitation dribbles causing Knicks Forward Danilo Gallinari’s knees to shake. Durant got just enough space to pull-up and fadeaway for three. With his foot sticking out on the pose, the ball dropped through the net as the buzzer sounded.

The footwear featured in this game-winning pose was the Nike KD 3. This style was in line with previous Durant signatures, retailing at an affordable $88. The Zoom Air unit in the forefoot remained for added responsiveness, but most other details changed from the KD 2. The upper swapped synthetic leather uppers for the more durable Hyperfuse material. This combined with Flywire strands in the midfoot for added lockdown. The KD 3 was also the first in the line to feature a low cut, playing to Durant’s guard skills.

The black and white colorway Durant wore for this moment is currently unavailable, but you can find other colors of the Nike KD 3 at StockX, GOAT, and Flight Club. 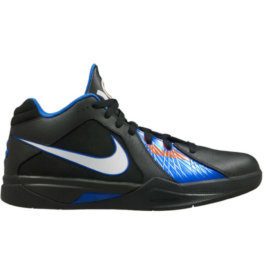