All eyes were on LeBron James when he stepped foot on-court against the Sacramento Kings for the first time ever in the NBA.

This was the regular season opener for the Cleveland Cavaliers, and the hometown kid was ready to show out. The iconic image of LeBron emulating what would be his Dunkman logo came from this game, in addition to the impressive numbers the future King would put up. The damage: 25 points, nine assists, six rebounds and four steals in 42 minutes. The point total was the most for any debut for a player coming straight from high school.

The sneaker LeBron James rocked for his first moment ever was the Nike Air Zoom Generation. This shoe was designed to be the comfiest basketball shoe ever which LeBron co-signed the first time he wore the shoe. It boasts natural materials on the upper, as well as bouncy Zoom Air units in the heel and forefoot.

The black and white colorway that LeBron rocked for this historic game can be found HERE.

You can find other colors of the Nike Air Zoom Generation at StockX, Flight Club, and Stadium Goods. 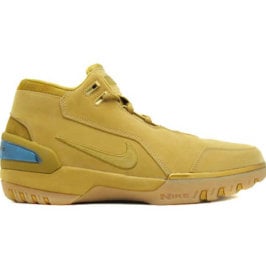