On this play, LeBron James drifted in the paint and cut weak side off a Tyson Chandler back screen. King James thought he had an easy layup but Doncic tracked him the entire time. Luka jumped before James could elevated all the way and swatted the shot with his right hand. LeBron gathered quickly and tried another layup. Doncic quick-jumped and swung down for the second consecutive block on the King, the the awe of the Staples Center crowd.

Doncic wore a white and black PE for this game, but you can find colors of the Nike Hyperdunk X Low at StockX, Flight Club, and GOAT. 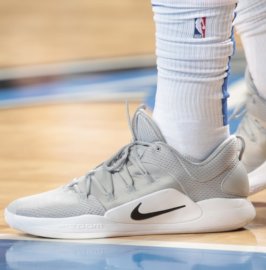