Luka Magic made an appearance to absolutely embarrass James Johnson and the Miami Heat.

On this play, Doncic had Johnson on his toes with a drive right into a behind-the-back dribble. Luka then drove right before abruptly establishing his pivot foot and spinning. The change of momentum had Johnson crumbling to the hardwood in a heap. James even rolled on the ground to stop his forward motion, blocking out two teammates in the process. With all the space in the world, Doncic slowly laid the ball into the hoop, with the Miami crowd still oohing.

The sneaker Luka wore for this highlight was the Nike Kyrie 4. This style is known for it’s biting traction, as is the case for most Kyrie sneakers. The tread rides up the lateral midsole, providing a teeth design of sorts. Aside from the aesthetics, this feature helps players like Luka have more balance when performing crossovers.

The “Red Carpet” colorway can be found HERE.

You can find other colorways of the Nike Kyrie 4 at StockX, Flight Club, and Stadium Goods. 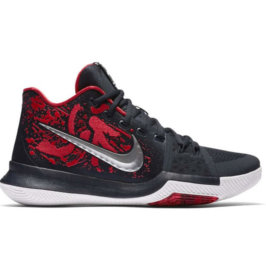