One of Luka Doncic’s most clutch career shots came in dramatic fashion against the Portland Trail Blazers.

The home team looked to have the game on lock, with the Blazers up 107-104 with only 0.7 seconds left. Dallas Mavericks teammate Jalen Brunson inbounded precariously behind the basketball, faking to his right. Luka then flared to the far corner with Mo Harkless tailing him. Brunson threw a dime to that left corner, and Doncic threw up the shot as soon as it reached his hands. The rainbow shot seemingly hung in the air forever, with Brunson and Wesley Matthews celebrating with their arms up. The shot toilet bowled around the rim before dropping through the net. Dallas would end up losing in OT, but this play showed that Doncic was a player to watch in the clutch.

The sneaker Luka wore for this game was the Nike PG 2. This sneaker uses “dynamic wings” were used near the forefoot lacing to provide snugness. The responsive Zoom Air unit placement was retained under the forefoot, but was made larger for extra bounce.

Doncic rocked a red and gold PE for this game, but you can find other colorways of the Nike PG 2 at StockX, GOAT, Stadium Goods, and Flight Club. 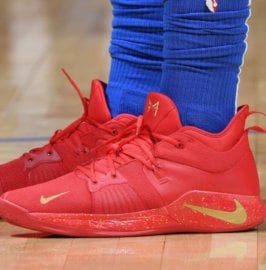